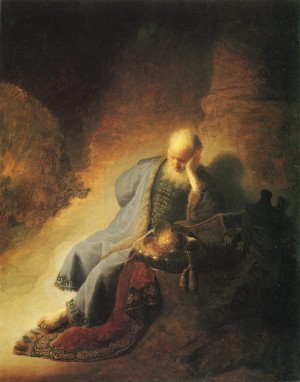 There are several texts throughout Scripture which seem to indicate that God has specifically chosen or elected certain individuals before they were ever born. One of these is Jeremiah 1:4-5, which says this:

Then the word of the Lord came to me saying,
“Before I formed you in the womb I knew you;
Before you were born I sanctified you;
I ordained you a prophet to the nations” (Jeremiah 1:4-5)

Though this text does not use the words “choose” or “elect,” it is plain to see why it is a favorite verse for those who want to defend the Calvinistic understanding of Unconditional Election. Clearly, before Jeremiah was even born, God “knew” him, “sanctified” him, and “ordained” him.

Jeremiah 1:4-5 is not teaching Unconditional Election

Several things about this text, however, indicate that something else is being taught in this text than the Calvinistic doctrine of Unconditional Election. The first and most important thing to notice about this text is that even if God did elect or foreordain Jeremiah, it was not to eternal life, but rather, to be “a prophet to the nations.”

In other words, if election is being taught in Jeremiah 1:4-5, it follows the same theme of election we have seen in the other posts on election. Jeremiah’s election was not an election to receive eternal life, but an election to perform a specific service.

Once we recognize this, the rest of what God says to Jeremiah become clear. When God says that He “knew” Jeremiah before he was born, it means that God understood everything about Jeremiah. This is a text which teaches about the foreknowledge of God as being comprehensive and complete. God knew everything there was to know about Jeremiah, and on the basis of this foreknowledge, selected Jeremiah to be a prophet to the nations.

This is what the word “sanctified” means as well.

Though we often think of the word “sanctified” as a reference to the “second stage” of salvation, so that after a person is justified, they then become sanctified, we must remember that the most basic meaning of the word “sanctified” is “to set apart.” When believers who have been justified then go on to sanctification, they are being set apart from the world of sin so that they can better serve God.

So also with Jeremiah. It is not that he was becoming more holy before he was even born—that makes no sense. Instead, God had “set apart” Jeremiah by choosing him to be a prophet to the nations. He was a special man with a special message.

Finally, the context of Jeremiah 1:4-5 make it abundantly clear why God is saying these things to Jeremiah at the outset of his prophetic ministry.

After God says that He has known, set apart, and ordained Jeremiah to serve as a prophet, Jeremiah basically says, “But God, I am not a good speaker! I am too young!” (Jeremiah 1:6). God knew of Jeremiah’s doubts about his own ability to serve as a prophet, and so indicated to Jeremiah that God knew him better than Jeremiah knew himself (Marston and Forster, God’s Strategy in Human History, 232).

God, knowing what kind of man Jeremiah would be, set him apart from his mother’s womb, and ordained him to be a prophet to the nations.