You are here: Home / No Christian Baptism in Acts 2 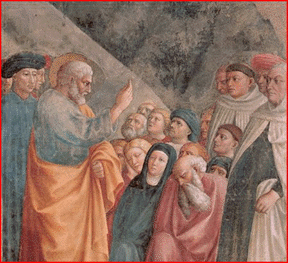 This is not a “Christian baptism.” It is still a Jewish baptism. Everyone who was baptized this day was Jewish, and every one of them continued to be Jewish.

They were just now trying to be more fully Jewish by turning away from the corruption that had come upon Judaism of that day, and were turning toward a Judaism which accepted and believed that the Messiah had come in Jesus Christ, and the new order of God’s Kingdom had arrived on earth.

The fact that the people who were baptized had made such changes in their lives is indicated in the following verses, where Luke writes that the people who were baptized shared their possessions with one another, took care of those who had need, and lived joyfully with one another in gladness and simplicity (Acts 2:46-47). These are some of the post-baptismal changes they undertook.

And this is why many people were added to the numbers daily. The people who were watching and observing to see what changes occurred in the lives of those who had been baptized were impressed and encouraged by the changes they saw, and wanted to participate in this growing community which represented the values and goals of the rule and reign of God as exemplified in the person and work of Jesus Christ.

So what we see in Acts 2 is that Peter, through his sermon and by the use of Jewish water baptism, used the Keys of the Kingdom (Matt 16:19) to open the door of the Kingdom of God to the Jewish people. And many thousands of people walked through that door by dying to their past, and agreeing to live life according to the rule and reign of God. The first phase in the final instructions of Jesus was now complete (cf. Acts 1:8).

Struggles of the Early Church

The next several chapters of Acts reveal many of the internal and external struggles and issues that these early believers in Jesus faced. Many of the Jewish people who had heard the message about Jesus did not appreciate being told that their form of Judaism had become corrupt, and that many Jewish people were dying to it through Jewish baptism, and choosing instead to follow the teaching of the Jewish Rabbi Jesus. And so they persecuted, arrested, imprisoned, and even killed many of their Jewish friends, neighbors, and coworkers who had indeed decided to follow the life and example of Jesus (Acts 4–7)

This new community also faced struggles from within, with some of their members lying to one another (Acts 5:1-11) and certain Jewish people not getting treated as well as others (Acts 6:1-7). And yet the community of Christ followers continued to increase and grow, even as the persecution against them also increased in ferocity and intensity (Acts 8:3). All of this persecution caused most of the new believers to scatter abroad through the Roman Empire seeking protection and safety in other areas (Acts 8:1). The apostles, however, continued to remain in Jerusalem.

The stage is now set for the good news message about the Kingdom of God to expand once again.