You are here: Home / z / The Secret Logic Behind Total Depravity 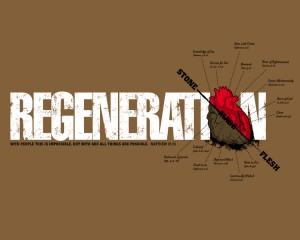 OK, so it’s not that much of a secret, but there still are some things about Total Depravity that Calvinists will often not say when they are first presenting their views to others. To really get at the ideas below, you have to know what questions to ask.

Total depravity sounds biblical until you start to dig around in it and see all the secret logic that goes with it.

So next time you hear a Calvinist talk about Total Depravity, ask some of the hard questions, and see what they say!

The secret logic behind Total Depravity is as follows:

1. People Cannot Do Anything Good for God

First, as sinful, unregenerate human beings, people can do nothing good for God, nothing to earn or merit eternal life, and nothing which might put them in God’s good graces.

Frankly, I agree with this, as do most Christians. It is because Calvinists use this widely-accepted Christian idea that their system of beliefs gains acceptance as well. Usually, once a Calvinist is able to gain assent to this first idea of their doctrine, they quickly move on to the second main point of Calvinism, that of Unconditional Election. We will look at this point in later posts, but for now, we need to slow down and consider several steps within the Calvinistic logic which occasionally go unmentioned.

In this way, they are saying that faith is a good work, or that faith is meritorious. In an earlier post we looked at several Calvinistic quotes which stated this very thing.

But of course, this is exactly where the discussion of Total Depravity begins to get off course. Faith is not a work, and is not meritorious. We will see why later in this series on Calvinism, but for now, let us continue to follow the Calvinistic logic.

3. Faith is a Gift from God

Following on the idea that faith is meritorious, and therefore impossible for an unregenerate person to do, Calvinists nevertheless recognize that there are scores of passages all over the New Testament which call unbelievers to believe in Jesus for eternal life.

So they say that since God requires people to believe in Jesus for eternal life, but knows that they cannot, God Himself gives the “gift of faith” to people so that they can then believe in Jesus. They have a couple texts they use to defend this idea, one of which is Ephesians 2:8-9, which will be considered tomorrow.

Again, there are numerous quotes in the post called “Regeneration Precedes Faith” which allows Calvinists to explain this idea in their own words.

No matter how it is explained, however, this idea is more blatantly wrong than any of the other logical steps leading up to it. Scripture everywhere states that people are given life (or regenerated) in response to their faith; not as a precondition to it. In Colossians 2:12, for example, Paul states that we were raised with Christ (that is regenerated, or “made alive,” 2:13), through faith (cf. John 3:16-17; Acts 5:32; 15:7-9; 16:30; 1 Pet 1:22). People are regenerated by God because they believe; not so that they can believe.

One of the key texts to support his idea is Ephesians 2:5, which we will look at tomorrow.

Was Any of this a Secret to You?

If you have done much reading on Calvinism, none of this was probably new to you. But if you haven’t read much about Calvinism, was any of this new? Had you heard any of this before? What are your initial thoughts? Let me know in the comment section!