You are here: Home / The Bible Jesus (Didn’t) Read 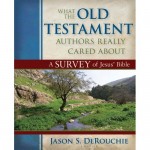 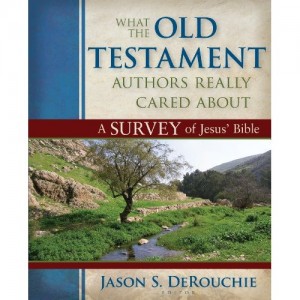 Kregel sent me a copy of What the Old Testament Authors Really Cared About: A Survey of Jesus’ Bible, edited by Jason DeRouchie.

By the title, I expected a Christologically-centered survey of the Old Testament, which, frankly, would be a welcome addition to the typical Old Testament survey fare.

I do not deny that such studies should be of primary importance for understanding the biblical text. But what such approaches fail to recognize, is that the human authors and audience were not the primary author or audience. Since the Bible is an inspired book, God is the primary author of Scripture, and since He has a view toward the redemption of all humanity from the predicament we find ourselves in, God’s primary intended audience is all people throughout time.

So anyway, I was hopeful that What the Old Testament Authors Really Cared About would fill the void that is missing in Old Testament studies, and show us what God meant when He inspired the authors to write the various books of the Old Testament, and how these books point to and were fulfilled by Jesus Christ. Ultimately, I was hoping that this book would show us how Jesus Himself read and understood the only Bible He had, namely, the Jewish Scriptures.

The book started off great. The opening chapter by Jason DeRouchie showed how the organization of our modern English Bibles is not the same organization that Jesus would have known, and this opening chapter also showed that the constant and recurring themes of the Old Testament authors are also the constant and recurring themes in the life and ministry of Jesus. Themes such as exile and redemption, the inauguration of the Kingdom of God, and how Christ is the climax of the various covenants were all discussed in this opening chapter. So far, so good.

But then something happened. I am not sure what. The rest of the volume contained summaries of each book of the Bible by various scholars and professors. They presented the main idea of each book, gave a synopsis of the outline and thoughtflow in the book, and discussed some of the major themes. But one thing that seemed missing from nearly every chapter was the one thing that I thought I was reading: the chapters were missing explanations of how these Old Testament books pointed to Jesus or were understood by Him.

For the most part, the rest of the book seemed like every other Old Testament Survey I have ever read.

Maybe DeRouchie as the editor for the book did not adequately explain to the contributing authors what exactly the purpose of this book was. Maybe he figured that having read the opening chapter, we the readers could fill in the blanks for the rest of the book. Maybe the failure was completely on my part to connect the dots between the opening chapter and the chapters that followed. I don’t really know.

So I suppose that when it comes to Old Testament surveys, this one is just as good as any other. It just doesn’t seem to fit the bill of what the cover and the first chapter led me to believe I was reading. 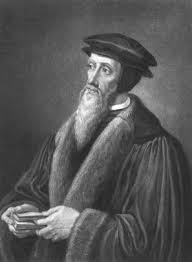 Having said that, however, there is one main reason I cannot recommend this particular Old Testament survey. My complaint will actually be a reason which many people will find this to be one of the best surveys available. My complaint is this: Most of the chapters (including the first one) seemed to focus not so much on pushing the reader toward Jesus Christ, but toward John Calvin.

Sure, Calvin was never mentioned by name (that I recall), but Calvinistic themes were evident throughout the book. Themes such as God’s supremacy and sovereignty, the depravity of man, God’s wrath toward sinners, the redemption of the elect through God’s irresistible grace, and the idea that God’s holiness required a judicial, substitutionary atonement in the form of retributive judgment.

I, for one, am not convinced that this is indeed the way Jesus understood His Bible. I don’t think Jesus was a Calvinist (or at least, held the theology that Calvin and his followers later taught).

If you’re a Calvinist, of course, then you will think this Old Testament survey is great (which helps explain all the Calvinistic endorsement in the front). But if you’re not a Calvinist, then you will frustrated by this survey, as it seems that according to the authors, no matter what happens in the Old Testament, it is done “for the praise of God’s glory.”

In the end, it appears that “What the Old Testament Authors Really Cared About” is Calvinsim. Since I am not a Calvinist (nor an Arminian!), I will stick with some of the other Old Testament surveys on my shelf.