You are here: Home / Redeeming Life / Work and Prayer by C. S. Lewis

Below is a classic by C. S. Lewis on the relationship between work and prayer. See the related  titled “The Efficacy of Prayer” in C.  S. Lewis, The World’s Last Night and Other Essays.

Even if I grant your point and admit that answers to prayer are theoretically possible, I shall still think they are infinitely improbable. I don’t think it at all likely that God requires the ill-informed (and contradictory) advice of us humans as to how to run the world. If He is all-wise, as you say He is, doesn’t He know already what is best? And if He is all-good, won’t He do it whether we pray or not?

This is the case against prayer which has, in the last hundred years, intimidated thousands of people. The usual answer is that it applies only to the lowest sort of prayer, the sort that consists in asking for things to happen. The higher sort, we are told, offers no advice to God; it consists only of “communication”…with Him; and those who take this line seem to suggest that the lower kind of prayer really is an absurdity and that only children and savages would use it.

I have never been satisfied with this view. The distinction between the two sorts of prayer is a sound one; and I think on the whole (I am not quite certain) that the sort which asks for nothing is the higher or more advanced. To be in the state in which you are so at one with the will of God that you wouldn’t want to alter the course of events even if you could is certainly a very high or advanced condition.

But if one simply rules out the lower kind, two difficulties follow. In the first place, one has to say that the whole historical tradition of Christian prayer (including the Lord’s Prayer itself) has been wrong; for it has always admitted prayers for our daily bread, for the recovery of the sick, for protection from enemies, for the conversion of the outside world, and the like. In the second place, though the other kind of prayer may be “higher” if you restrict yourself to it because you have got beyond the desire to use any other, there is nothing especially “high” or “spiritual” about abstaining from prayers that make requests simply because you think they’re no good. It might be a pretty thing (but, again, I’m not absolutely certain) if a boy never asked for cake because he was so high-minded and spiritual that he didn’t want any cake. But there’s nothing especially pretty about a boy who doesn’t ask because he has learned that it is no use asking. I think that the whole matter needs reconsideration. 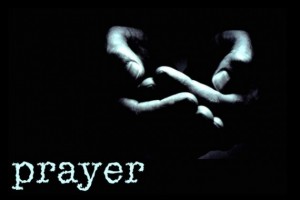 The case against prayer (I mean the “low” or old-fashioned kind) is this: The thing you ask for is either good – for you and for the whole world in general – or else it is not. If it is, then a good and wise God will do it anyway. If it is not, then He won’t. In neither case can your prayer make any difference. But if this argument is sound, surely it is an argument not only against praying, but against doing anything whatever?

In every action, just as in every prayer, you are trying to bring about a certain result; and this result must be good or bad. Why, then, do we not argue as the opponents of prayer argue, and say that if the intended result is good, God will bring it to pass without your interference, and that if it is bad, He will prevent it happening whatever you do? Why wash your hands? If God intends them to be clean, they’ll come clean without your washing them. If He doesn’t, they’ll remain dirty (as Lady MacBeth found) however much soap you use. Why ask for the salt? Why put on your boots? Why do anything?

We know that we can act and that our actions produce results. Everyone who believes in God must therefore admit (quite apart from the question of prayer) that God has not chosen to write the whole history with His own hand. Most of the events that go on in the universe are indeed out of our control, but not all. It is like a play in which the scene and the general outline of the story is fixed by the author, but certain minor details are left for the actors to improvise. It may be a mystery why He should have allowed us to cause real events at all, but it is no odder that He should allow us to cause them by praying than by any other method.

Pascal says that God “instituted prayer in order to allow His creatures the dignity of causality.” It would perhaps be truer to say that He invented both prayer and physical action for that purpose. He gave us small creatures the dignity of being able to contribute to the course of events in two different ways. He made the matter of the universe such that we can (in those limits) do things to it; that is why we can wash our own hands and feed or murder our fellow creatures. Similarly, He made His own plan or plot of history such that it admits a certain amount of free play and can be modified in response to our prayers. If it is foolish and impudent to ask for victory in war (on the ground that God might be expected to know best), it would be equally foolish and impudent to put on a [raincoat] – does not God know best whether you ought to be wet or dry?

The two methods by which we are allowed to produce events may be called work and prayer. Both are alike in this respect – that in both we try to produce a state of affairs which God has not (or at any rate not yet) seen fit to provide “on His own”. And from this point of view the old maxim laborare est orare (work is prayer) takes on a new meaning. What we do when we weed a field is not quite different from what we do when we pray for a good harvest. But there is an important difference all the same.

You cannot be sure of a good harvest whatever you do to a field. But you can be sure that if you pull up one weed that one weed will no longer be there. You can be sure that if you drink more than a certain amount of alcohol you will ruin your health or that if you go on for a few centuries more wasting the resources of the planet on wars and luxuries you will shorten the life of the whole human race. The kind of causality we exercise by work is, so to speak, divinely guaranteed, and therefore ruthless. By it we are free to do ourselves as much harm as we please. But the kind which we exercise by prayer is not like that; God has left Himself discretionary power. Had He not done so, prayer would be an activity too dangerous for man and should have the horrible state of things envisaged by Juvenal: “Enormous prayers which Heaven in anger grants.”

Prayers are not always – in the crude, factual sense of the word – “granted.” This is not because prayer is a weaker kind of causality, but because it is a stronger kind. When it “works” at all it works unlimited by space and time. That is why God has retained a discretionary power of granting or refusing it; except on that condition prayer would destroy us. It is not unreasonable for a headmaster to say, “Such and such things you may do according to the fixed rules of this school. But such and such other things are too dangerous to be left to general rules. If you want to do them you must come and make a request and talk over the whole matter with me in my study. And then – we’ll see.”