When seeking answers on how to understand the flood in light of Jesus Christ, we must also consider what Peter writes in 2 Peter 2. His statements are critically important, for Peter lived and walked with Jesus, and would likely have heard how Jesus explained the flood. Furthermore, since Peter was one of the apostles, his explanation of the flood event in 2 Peter 2 provides an authoritative, biblical explanation for how to understand this difficult passage.

Note first that, as with the Hebrew text in Genesis 6–7, the temptation exists to retranslate the Greek text in 2 Peter 2:5 so that it shows something different from what is usually found in most English translations.

And in fact, this would be somewhat easy to do, since these first several verses of 2 Peter 2 are full of Greek participles, which are notoriously difficult to translate and understand in context. With Greek participles, there are always a host of questions about how the participle is functioning in context.

So just as with the Genesis text, I initially thought of basing my understanding of this passage on a different translation of 2 Peter 2:5.

But in the end, I decided against this option for two reasons.

First, the average English translation of this text is fine, and second, I do not want readers of the English Bible to think that the only way they can see Jesus in the violent passages of Scripture is through creative translations from the Greek and Hebrew.

The key to 2 Peter 2:5—as with any text in the Bible—is context. Peter begins this section of his letter by warning about false teachers and how they bring swift destruction upon themselves.

This initial verse is critical for understanding the rest of this section in 2 Peter 2. After talking about how the false teachers are bringing destruction upon themselves, Peter is going to give several examples from biblical history about other groups of people who were destroyed. 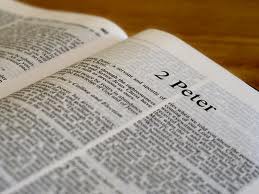 Furthermore, in the verses that follow, the primary action of God is not death and destruction, but deliverance and rescue of people from destruction. The repeated emphasis in 2 Peter 2:4-9 is not on how God destroys people but on how God saves and rescues people.

Peter gives three examples. First, he writes about the angels who sinned, and so were not spared (2 Peter 2:4). Peter then sets these angels in contrast to Noah whom God did rescue when the flood came upon the earth (2 Peter 2:5). Finally, Peter mentions Lot, who was rescued from Sodom and Gomorrah (2 Peter 2:6-8). In 2 Peter 2:9, Peter summarizes his point by saying that the Lord knows how to rescue godly men from trials while allowing the unrighteous to continue toward their punishment.

Following these three examples, Peter goes on to emphasize once again that these false teachers have every opportunity to escape destruction, but they continue moving deeper into sin, wickedness, and corruption until they too are destroyed (2 Peter 2:10-22). Just as Peter wrote in 2 Peter 2:1, the actions of the false teachers are bringing this destruction upon themselves. 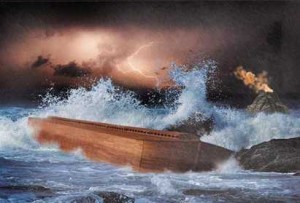 The great sin of the people who lived at the time of the flood invited in the destruction that took their lives.

Even in 2 Peter 2:4, Peter says that the angels were handed over, or delivered up, to their judgment. This again is the common terminology used throughout Scripture to describe the process by which God gives His creatures the freedom to go their own way, even when it is in rebellion to Him. He hands them over to their sin. He gives them up to it. God’s creation lived in sin and rebellion and as a natural consequence of their wickedness, death and destruction came upon them.

In 2 Peter 2, Peter is clearly revealing the idea that sin cannibalizes itself and when sin takes root and leads us further away from God, there comes a point when we depart from God’s protective hand, and invite ruin and destruction upon ourselves.

When this happens, however, all is not lost. God is faithful to rescue, redeem, and deliver a righteous remnant for Himself out of the death and destruction that comes upon the wicked.

The Consequences of Sin in 2 Peter 3

This is exactly the point that Peter makes in 2 Peter 3. In 2 Peter 3:3-7, he returns to the topic of the flood to make his point once again about how God will deal with people who follow their own evil desires in the last days. Peter writes in 2 Peter 3:6 that the world perished when it was flooded with water. God’s creative work is described in 2 Peter 3:5 as causing the heavens and the earth to be formed out of water and by water, but when people sinned, they brought the waters back in upon themselves, to their own destruction (2 Peter 3:6). Notice the imagery Peter uses of God pushing back the waters to create and bring form to the world, and how the waters bring the flood and destroy the world that God created. The cosmic warfare motif we saw in Genesis 1–8 is evident here in Peter’s writings as well.

Peter is clearly painting this contrast that we have already seen between the creative work of God in bringing order to the chaos in Genesis 1, and the exact opposite of this, when the waters came back upon the face of the earth and destroyed all that God had created. Through this contrasting imagery, Peter is showing that he understands the imagery and symbolism of the flood event, and that God was not causing or sending the flood, but was doing everything He could to rescue and deliver people from it. The flood came as a result of sin and rebellion, of nature out of control, or the destroyer seeking to destroy, of sin cannibalizing itself, and of people separating themselves from the protective hand of God. 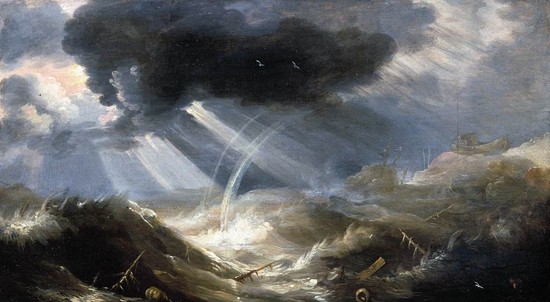 Peter’s ultimate point is made in 2 Peter 3:9: God does not want anyone to perish, but wants everyone to come to repentance. God does everything possible to withhold the flood waters, to stop the destruction, and to restrict calamity. God takes no pleasure in the death of anyone, not even the death of the wicked. He does not want the wicked to die, but wants them to repent and so He does everything He can to give people ample opportunity to repent.

But there comes a day when their sin is so great and their rebellion has gone on for so long, that the cannibalistic nature of their sin and the destroying power their rebellion carries them out of the protective hand of God, and He has no choice but to let destruction come. He gives them over to their sin.

Notice one last thing about the 2 Peter 2 passage. Peter ends his letter by talking about the second “flood” that will come upon the earth, but this time it will not be a flood of water, but a flood of fire (2 Peter 3:10, 12). The imagery of the world being consumed with fire is identical to the image used by Jesus in Matthew 24 which we considered in a previous post, and so nothing else needs to be said about it here.

The flood narrative in Genesis 6-8 is difficult to understand in light of the self-sacrificing nature of God revealed in Jesus Christ on the cross. How can the God who drowns everybody on earth because of their sin, be the same God who dies for everybody on earth because of their sin? Though there are numerous issues surrounding these chapters, Genesis 8:21 helps us understand what God was doing in the flood. When we understand Genesis 8:21, it shows us that God was acting much more like Jesus than many assume.

After the flood, Noah and his family set out to reestablish themselves on the earth, and when  Noah offers a sacrifice to God, God promises to never again destroy every living thing in the same way (Genesis 8:21). God says that even though man’s heart is constantly evil, the flood waters will never again come upon the earth to destroy everything that breathes.

Three things about Genesis 8:21 reveal to us what God was doing in the flood.

1. God Restricts His Own Freedom

First, in previous posts, I have argued that God did not actively “send” the flood, but that it came upon the earth as a natural consequence to mankind’s rebellion. The flood is an example of nature out of control, of sin cannibalizing itself, and of the destroyer seeking to destroy.

Though it is popular to say that God can do whatever He wants, God cannot do what is logically impossible (such as make a round square), do anything that violates His own nature (such a sin), or do anything that goes against something He has already decided and determined (such as give humans free will). “God lets the creatures have the freedom to be what God created them to be”  (Fretheim, Creation Untamed, 53).

Lots of people have problems with the idea of God limiting Himself for the sake of humanity. They feel that since we are God’s creatures, He can do with us whatever He wants, even if it means squashing us all like bugs under His divine thumb. They often point to the flood as an example of Him doing this very thing.

Note carefully, however, what God says in Genesis 8:21. He says that even though all humanity is completely evil from their youth, He will never again destroy every living thing as He has done in the flood. However a person understands the flood account, Genesis 8:21 clearly reveals God placing a limitation upon Himself.

Genesis 8:21 shows that God places boundaries upon His future choices so that a worldwide flood is never again a possibility. Whatever you think about the flood account, one thing it shows is that our God is a self-limiting God. He restricts His own freedom for the sake of His creation.