I had an interesting conversation recently with a man who attends a local mega church. Well, the church is about 1000 people, so it’s not quite “mega” (Which I think is defined as 2,000+ in attendance).

He was challenging my decision to follow Jesus outside the four walls of the church building, and had the usual objections:

Him: Why would you leave Christ’s church?

Me: I didn’t leave it. I just practice church differently than you do.

Him: But how do you use your spiritual gifts?

Me: In a multitude of ways, none of which require my butt to be in a pew on Sunday morning.

Him: But Christians are to live in community. Where is your community?

Me: First, church attendance does not necessarily equal community, but second, I live in deep community with other people like myself who also do not sit in pews on Sunday morning.

Anyway, the conversation went on like this for some time. At one point though, he said this:

Him: But you could be accomplishing so much more for the Kingdom of God if you were part of a large group of people. Sure, your small community can accomplish a few small things, but imagine if you were all working together with thousands of others! Your work would be multiplied! You would see exponential growth!

I told him it was a good point, and one that I would consider.

I have since considered his point … and I would like your input on how you might respond to such a question. Here are my points. What can you add?

1. The Kingdom of God is like a mustard seed

First, I have great trouble with this mindset that only big things are worthwhile.

Jesus constantly modeled that the small things, the unimportant people, the little children, the cup of cold water, the tiny mustard seed, the one act of faith, the shameful, the foolish, and the insignificant, … these are the things that mattered to God and where God was most at work.

Sure, Jesus performed some large-scale miracles, but it seems that as Jesus progressed in His ministry, He went smaller and smaller; not larger and larger. If Jesus had wanted to, He could have had thousands of followers at His back after 3 years of ministry. But this is not what He wanted. …So why is this what we want?

Even Jesus’ parable of the tiny mustard seed shows this. It is not uncommon to hear pastors say, “See? This church started as a tiny little group of people meeting in my living room. But now, it is thousands of people with a multi-million dollar budget. The tiny mustard seed has grown into a giant tree!”

It sounds good, but it’s plain wrong. Yes, the tiny mustard seed grows into a large tree so that even the birds can sit in its branches, but if we ever say our particular church or ministry is “the large tree” we have completely misunderstood what Jesus was saying.

What grows into a large tree? The Kingdom of God does … not my little corner of it. No matter how large we become, our part in the Kingdom will always be small.

Here is often how these comparisons go:

You and your small group did a good thing there helping that poor family in town pay their rent this month. But at our church, we raised enough money to build an entire orphanage in Africa and staff it for an entire year!

Sure, you’re small group of six people spent $300 to help that family, but if you could have joined that money with the $250,000 raised by our church this year to build that orphanage, imagine how your investment in the Kingdom would have multiplied!

Initially, such a comparison sounds compelling. It’s true … helping one family pay rent for one month does not sound as impressive as building and staffing an African orphanage to help rescue, feed, and teach orphans for a year.

But if you begin to crunch the numbers, things look quite different. If 6 people raised $300 in one month to help one family, then this comes to about $50 per person per month. Who’s to say they won’t do something similar next month? And the month after that? Over the course of one year, this is about $600 per person.

Meanwhile, if you take the $250,000 that church raised for the orphanage, and divide it between the 1000 people in the church, this comes to $250 per person.

Obviously, I’m just making these numbers up, but this is how these ministry comparison’s are often done. The tiny little ministry a small group does for a local need is compared with some giant project that a large group does for some other (usually foreign) ministry. But if you really start to compare apples to apples, you will almost always find that the small groups are more generous.

But what about what is accomplished? Isn’t that important? Yeah, let’s talk about that?

Here is the main concern I have with big ministry projects done by big churches. Usually (but not always!), because of the large scale of the project, there is relatively little personal interaction between the “givers” and the “receivers.”

Instead of six people helping out a family across the street, whose names are known, whose needs are obvious, and where relationships can get developed, 2,000 people give money into a giant pot to help a nameless “need” in some other part of town or across the country. Then, after administrative costs and overhead are deducted out of the money that comes in, a team of people goes out to perform the ministry to the massive group whose “need” is trying to be met.

But because the ministry team has to meet the “need” of such a large group of people, there is very little opportunity to get to know the people. Very little relationship building is accomplished.

Sure, bellies are filled, buildings are raised, classes are taught, and books are distributed, but how many long-term relationships were built? How many names were learned? How many conversations were had?

I sometimes think that the way some churches define ministry is not always identical to the way Jesus defines ministry.

If you write a check for $500 to help build an orphanage in Africa … but don’t know your neighbor’s first name, what good is it?

If you attend every mission’s conference your church hosts, but have never learned about the marital problems of your coworker, what good is it?

If you know your Bible forward and backward and memorize 365 verses a year, but don’t know the names of the children on your street, what good is it?

Look, everybody has different ministries and different goals, but I just get tired of having to defend small, one-on-one, loving-my-neighbor ministry to people who think that the only true ministry is one that costs hundreds of thousands of dollars, involved thousands of people, and takes place on another continent.

Ministry does not become more spiritual when it is baptized in salt water (when it takes place across the sea).

If you are not loving your neighbors right now, you cannot write a big check and call it “ministry.”

Okay… so you can weigh in below. Have you ever encountered this “Go big or go home” mentality when it comes to ministry, and that small groups of believers would be wiser to pool their time and resources with large churches so that their ministry effectiveness can be multiplied? If so, how do you respond? 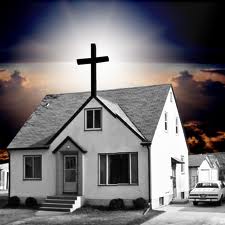 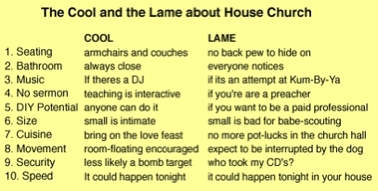