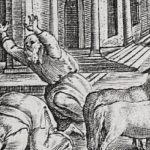 Did you know that you can evangelize and be a witness for the Gospel as you go about your day and interact with others without having to share the Four Spiritual Laws with them, or walk them through the Romans’ Road? It’s true! You do not have to stand on the street corner shouting through a bullhorn or go door-to-door interrupting people in their homes to share the gospel.

God can start a city-wide revival through the smallest of acts. You don’t have to be Billy Graham. This is what we are going to learn today from Jonah 3:5.

So the people of Nineveh believed God, proclaimed a fast, and put on sackcloth, from the greatest to the least of them.

In this discussion of Jonah 3:5 we look at:

This is a guest post Brandon Chase. Brandon is a baseball player at heart; a practicing Crossfitter, golfer, hoopster and guitarist; fueled by meat, cappuccinos and chocolate. He writes about learning to Live by the Life of Jesus Christ on his blog Zōē Perissos. He is married to his high school sweetheart, Marie, and has two daughters McKinley and Delaney. They live in Fort Worth, TX.

Do you remember doing Science Fair projects in school? You know, the ones where you did an experiment in order to answer a question, solve a problem, or explore a “what if?”

I’m certainly glad I’m not in 7th grade anymore, and don’t have to whip out my tri-panel display board and fret over whether the Judges are going to like my project. But, I do have an experiment, while hypothetical, that I’d love to see tested:

What would happen to the Church – the Body of Christ, if it were forced to exist without:

As I stated, I realize this experiment is an anecdotal exercise. Truly, it would take an extreme set of circumstances (or… a magnificent move of God) to arrange a new playing field such as this.

What would you do if you woke up one morning, and suddenly, as if in an alternate reality, you learned that following your Lord, practicing and growing in your faith – being a Christian – had to be done differently… 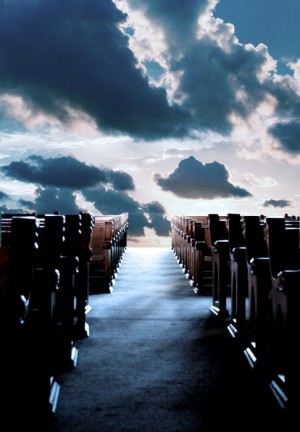 What if there were no “churches” to “go to?”

What if there were no buildings where Christians gathered once or twice per week?

What if there were no “Ministers?” No “Pastors?” No “Preachers?” No “Leaders?”

What if there were no denominations? No groups of like-minded people who practice the same theological or doctrinal expression and traditions?

What if there were no institutions to which you would tithe or give? There were no tax deductions? No budgets directing the allocation of funds or mission statements or plans dictating ministry form?

You would have prayer, the Bible, and people – but none of the above.

What would happen to the world?

I am giddy as I fantasize about this query.

Can you imagine? The Body of Christ being released into the wilderness – amongst the darkness and danger and wolves of the world – with no “church” building to retreat to on Sunday, no “Pastor” to listen to week after week, no tribe to look for answers in tradition and no tax motivation or direction on where to give money?

It was He in fact who said He was sending us out like sheep amongst the wolves. He said just as He is Light, so too are we, shining in the darkness. He said that the world was dangerous, but that He had already overcome it, and that we were the real dangerous ones in Him.

He also said He was the Head of His Body, the Church. He would lead; we would be equal, united and mutually beneficial members to each other, and the Body as a whole.

He said that as sheep, we listen to His voice and hear Him, as He leads us, and we follow.

He said there was no room for division or faction – only Him.

He said nothing about giving a certain percentage. He asked for everything. He did not direct ministry. Ministry is His Life – and It is to be taken everywhere, all the time, as He directs.

These were the simple, but profound instructions a small group of followers received from their Lord. They didn’t have buildings they erected and gathered in. They didn’t place titles on certain people or create offices around them. They knew nothing of denominations. They were not given percentage of giving or mission plan guidelines.

Instead, they gathered with each other, two or more at a time, at varying points in the day, every day, in as many varying forms and expressions as possible.

When they gathered, Christ, by the Holy Spirit, “lead” the meeting. He set the agenda. He was the agenda. He was expressed and His Life was given, and out of that expression and Life came mission direction and action – always in the form of humility, service and Love. Money and possessions and resources were given freely, generously, spontaneously and continuously – with no thought to percentage or personal benefit. Ministry was organic, dynamic, and viral.

Their simple, but powerfully obedient response to their Lord’s commission, changed the world.

The early Christians did not have anything that we do not have today. In fact, they had so much less. But the advancement of the Kingdom and the Life of Jesus was so much more explosive in their time.

This begs the question:

How did the early church do so much with so little? And… How are we doing so little with so much more?

And these are indeed good questions. But they are not the best question, which is:

What do we have now, that they didn’t have, that may be hindering the Kingdom?

While the answers to that question cannot be fully treated in one article, might I submit that in part, they include:

God is not hindering His work in our age. He has not designed that this time be marked with less power and wonder and expansion of His Kingdom.

No, man has done that.

Maybe, just maybe, this little experiment should not be anecdotal or hypothetical at all.

Maybe, we’ve always had the prescribed steps, ingredients and answers to this all along?

We have Him. He is all we need.

Maybe He is calling His children to get ourselves – our stuff and our ideas, out of the way…