You are here: Home / Redeeming Scripture / Is Biblical Illiteracy a Problem in the Church? 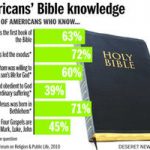 This past week I was interviewed by Thom Schultz, the CEO of Group Publishing, for his “Holy Soup” podcast. Thom interviewed me about whether or not biblical illiteracy is that big of a deal in the church today.

My answer was “No. Biblical illiteracy is not that big of a deal in the church today.”

The interview was only 30 minutes, and so I didn’t have time to say everything I wanted to say about this topic, so over the next few weeks I am going to write a series of posts which explains more. I wrote about biblical illiteracy back in 2013, but I want to say more about it now, and will do so in these posts. 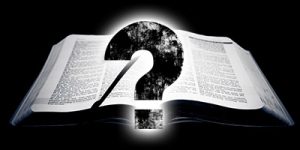 Ironically, this series of posts may seem to undercut everything I do here at RedeemingGod.com. After all, one of the stated goals of this blog and my Podcast is to help you better know and understand the Bible. However, by the end of these posts you will hopefully understand why I believe what I believe about biblical illiteracy and why I still think I should be writing and teaching about Scripture and theology on this website and through my podcast.

So in this first article, I simply want to review why this is an issue in the church today and what some Christian leaders and publications are saying about the so-called problem of biblical illiteracy.

My Primary Problem with the Quest for Biblical Literacy

One of the primary issues I have with the so-called problem of biblical illiteracy is that biblical illiteracy is all in the eye of the beholder. That is, depending on who you ask, biblical literacy has different definitions. That is, even if someone earned a score of 100% on a Bible Trivia quiz, does this mean they are biblically literate? What if someone memorized the entire Bible? Does that make them biblically literate?

Even if you said “Yes” to these questions, does knowing Bible facts, Bible trivia, and thousands of Bible verses actually help you live, love, and look more like Jesus? The answer is clearly “No.”

So for me, the whole quest for increasing people’s biblical literacy level is wrongheaded from the get-go. If there is no direct correlation between gaining Bible knowledge and facts and actually living like a follower of Jesus, then what’s the big deal about becoming biblically literate?

Anyway, I will write about all this a lot more in future articles. In this article, I simply want to show you what some people are saying about biblical illiteracy in the church today and respond briefly to their concerns.

Is Biblical Illiteracy an Epidemic?

A recent article written by Ed Stetzer in Christianity Today argued that we are facing an epidemic of biblical illiteracy in our churches today. 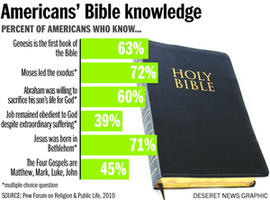 After laying out his case and citing some statistics, Ed Stetzer said that the following eight activities indicate that someone was more likely to be biblically literate.

I don’t know how Ed Stetzer came up with this list, but I disagree with each one of the points. I do not think that such activities are all that important for the Christian life. Yes, if someone does these things, they might gain more Bible knowledge, but who cares?

Again, what matters most? Knowing Bible trivia, or living and loving like Jesus? Since doing these eight activities will not necessarily lead to people loving their neighbors and interacting with the world with lives of grace (but is just as likely to lead to the exact opposite!), what’s the point? 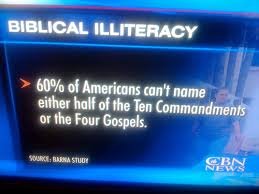 To see what I mean, consider these eight items again from a different perspective.

I think you see the point. Who cares about biblical illiteracy in the church today, since (1) it is nearly impossible to define and (2) those who supposedly have it don’t act any more (sometimes less) like Jesus than those who don’t.

Let’s look at one more article. 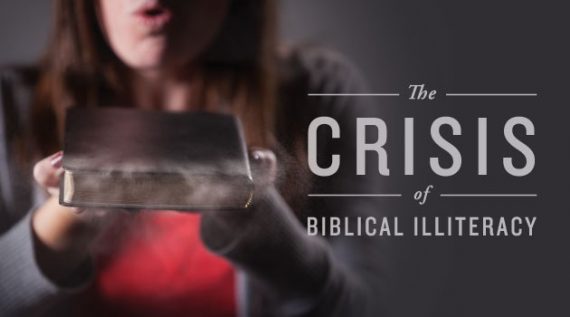 Is Biblical Illiteracy a Crisis?

Biola University published an article saying that biblical illiteracy was a crisis. They said it was because we spend too much time on TV, movies, social media, and video games.

Yes, we humans waste a lot of time. No argument from me there.

But I am not sure that Bible study is a good substitute. I often think that maybe Bible study is the biggest waste of time, because we think it is what God wants us to do, when really, He wants us to get out there and love others. And guess what? Loving others requires us to learn something about the life and culture of the people we want to love. So in one sense, watching TV and spending time on social media might be a good use of our time, because such activities allows us to engage with our neighbors and co-workers in activities and discussions that are meaningful to them.

By spending time with others where they are at, we can learn to love and minister and serve those in our families, neighborhoods, and workplaces.

I work at a secular workplace. For the past eight years, I have noticed that the most ineffective Christians are those who know nothing about TV, movies, social media, and video games. But wow do they know their Bibles! And everybody knows that they know their Bibles, because they are always carrying it around and quoting from it and talking about what they learned in church last Sunday. Which is why nobody wants to talk to them, befriend them, or hang out with them.

But I hang out on social media. I watch movies and TV shows. I play games. Why? Well, for one, because such things are fun (*gasp*), but also because I love the people I work with and I love talking about these things with them, and even joining them in these sorts of activities.

Speaking of which, I have such confidence in the power of God and the work of the Holy Spirit as a wind that moves wherever He wills, I am certain that the Holy Spirit is teaching people about Himself through TV, movies, music, social media, and video games. We just have to have eyes to see it. The person with spiritual eyes will see more of the gospel in Harry Potter than the person without spiritual eyes will see of the gospel in the Bible.

So Biblical Illiteracy is not that big of a deal

I will have much more to say about this topic in future posts, but I think you get the point I will be making.

On every day of the week, I will take someone who loves like Jesus even if they don’t know His words over someone who can quote all the words of Jesus but don’t do what He says.

And guess what? Despite what we might hear from some pulpits and read in some books, it is quite possible to do what Jesus says without knowing what Jesus says. I see it all the time. Have you?

What do you think about the issue of Biblical illiteracy in the church today? Is it a crisis? Is it an epidemic? Or are there other and better things to focus on? How would you respond to the points by Ed Stezter above? Weigh in below!