You are here: Home / Drunk with Blood: God’s Killings in the Bible 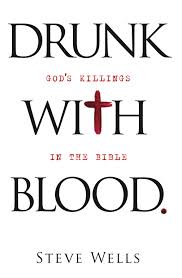 As I continue to write on how to understand the violence of God in the Old Testament, I am always shocked whenever I run into a Christian who thinks the Bible isn’t violent. I want to ask them if they have read anything outside of the New Testament (Even then, you have the book of Revelation and various teachings on hell).

One of the reasons is it is so critical to not only own up to the violence of Scripture, but also to have an answer for it, is because the violence of God in the Bible is one of the main reasons people today are rejecting Christianity and denying the existence of a good and loving God.

So if you happen to be a Christian who doesn’t know the Bible is violent, OR if you happen to think the violence of God in the Bible is “no big deal,” let me invite you to read  Drunk With Blood by Steve Wells. If you are a fundamentalist Christian, you will probably be offended at the humorous approach Steve Wells takes in his book, Drunk With Blood, by pointing out all the violence of Scripture, but I think that humor is the only way to write a 300-page book detailing all the violence in the Christian Scriptures. If the book didn’t contain humor, by the time we were done reading about all the killings in the Bible, most of us would want to kill ourselves as well. Without the humor, it’s depressing reading.

As for myself, I thoroughly enjoyed the book. I have read lists of the violence in Scripture before, but never one so detailed, so thorough, and so entertaining.

I personally don’t think Steve was “fair” with all of the biblical accounts of violence, since he often cuts off quotations in mid-sentence, but with all the clear “unfairness” in Scripture where actual human lives are getting “cut off” by God, it’s hard to quibble over minor details like that.

Look, if you want to know how the Bible looks to someone who doesn’t read the Bible through “Christian-colored” glasses, you must read this book. And if you want to know why Christians are often seen as hypocritical and violent, it is because we defend the actions in the Bible as “holy and just” while condemning identical behavior in people of other religions.

As a Christian myself, I believe Drunk With Blood should be mandatory reading for all Christians.

And hey! Bill Maher recommends it too:

Drunk With Blood shows us what we Christians don’t want to admit, that God is violent! The sooner we own up to this fact, the sooner we can start dealing with it honestly, and trying to understand the Old Testament violence of God in light of Jesus Christ dying on the cross.