You are here: Home / Redeeming Theology / A Gospelism Story to help you understand what it is 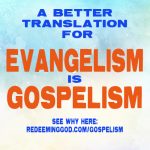 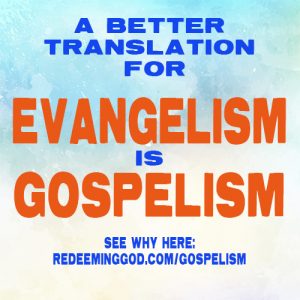 Below is a story I read on Alan Knox’s blog. I think it is a good example of one possible way to “gospelize.” (You will also like the blog series about Being the Church or the one about Loving your Neighbor.)

In November I heard Dino Rizzo speak in a workshop at the National Outreach Convention in San Diego. Dino talked about ways to serve the community. He said that if he were new in a city he would buy some garbage bags and volunteer at a community event to help do cleanup. If there was no community event, he said he would just go up and down the streets in his neighborhood and pick up trash.

I told this story to our little group that is trying to learn how to serve an inner city neighborhood in our city. We decided that we should try it the following Sunday morning, the second Sunday in December, and then do it every other Sunday morning. Our first Sunday out was a cold, windy day, but we met, prayed and then picked up trash in the neighborhood for about eighty to ninety minutes.

We skipped the fourth Sunday in December, since everyone in the group was out of town or occupied with visiting relatives. However, we resumed our trash pickup last Sunday, the second Sunday of January.

We met, prayed and started picking up trash. About two minutes after I started a car pulled up near me.

(Me) “We’re picking up trash to make the neighborhood look nice”.

(Me, while pointing to the yellow shirts we all wore that has our group’s name printed on it) “We’re a little group of Christians just trying to help out the neighborhood.”

(Me) “We’re just a small group that meets here in the neighborhood.”

(Him) “I mean, where’s your church? The building?”

(Me) “We meet in cafes or the park. We don’t use a church building. We try to be out around people.”

(Me) “No. We’re just followers of Jesus, and every other Sunday morning this is how we do church. We go out in the neighborhood and pick up trash.”

Suddenly I was his good friend.

(Him) “My name is xxxxxxxx. I’m on the planning commission here, and I’ve never seen anything like this. I’m church way back, but I don’t go any more. (He gave me some reasons. He doesn’t think much of “religious people”.) Now this is real religion.”

Several weeks earlier I walked these same streets trying to see what I could see, and prayed for the neighborhood. No one stopped to talk to me. No one smiled and waved as they drove by. No one came out of their house to talk to me. A couple of gang members asked me for money. That was it.

Oh yes, we do not hand out tracts or invite people to church. We’re just getting to know them and they’re getting to know us. They’re trying to figure out who we are. When they’ve got that figured out, perhaps, just perhaps, they’ll invite us into the spaces of their lives. That is where we will be allowed to hear each others stories. But for now, they’re just smiling, waving, coming out of their spaces to say hello or thank you or to ask who we are and what we’re doing.

After writing this, I thought about a group that is trying to start a new church. Twice they have walked through our neighborhood, hanging invitations to the new church on people’s doors. I watched them. No one smiled and waved at them as they drove by, no one stopped to talk to them, and no one came out of their house to talk to them. After the group had passed, I did see people open their doors to get the flyers, look at them a second or two and toss them in the trash. Hmmm!

I’m going to close out this series on gospelism with a post that might ruffle a few feathers.

See more on this gospelism series: