You are here: Home / God Takes on Our Violence 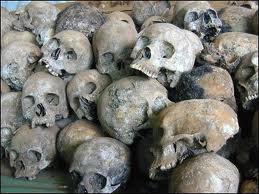 God Takes on the Violence of Israel

The violence of God in the Old Testament is exactly the violence of God, but is God taking on the violence of Israel. Israel, much like any other nation in history, was a child of its times, and set about living and functioning in a way that resembled the surrounding nations. Often this led to acts of war and violence against other people.

And though this was not the way God wanted them to behave, when they set out in these violent and warlike directions, God took their actions upon Himself.

He took responsibility for their behavior. He did not condone or command their actions, but when they set out to live in a way that was contrary to His will and ways, He inspired the biblical authors to put the violent actions of Israel upon Himself, so that He could take the blame and the shame for their sin.

If he can manage to absorb the violence onto himself rather than either responding with new violence of his own or hardening himself in a way that deflects the original violence back onto the world, he has a means of dampening the reaction and winding down the conflict.

… Evil is stymied because it simply cannot get the usual chain reaction as much as started. It punches itself out against the defenselessness of the [suffering] servant (Eller, King Jesus’ Manual, 161.

The Bible Says What God Wants

Look at it another way: If the Bible is inspired and inerrant, then it records exactly what God wanted recorded. And if we read the Bible backward, then we read Jesus back into those violent portrayals of God in the Old Testament rather than read those depictions of God forward onto Jesus.

When we do this, we can assume that whatever appears inconsistent with the nature and character of Jesus Christ as recorded in the Gospels, comes not from God but from agents who oppose the will and ways of God, or from those who simply do not understand what God is truly like.

But often these passages in the Old Testament will state that the instructions were given by God, and if we read these texts in the light of Jesus, then we understand that although God was not telling them to do such things, He nevertheless inspired them to write what they did so that He could take the blame for their sinful actions. Just as Jesus came to destroy the devil’s work, to become sin for us, and to reveal God to us through His entire life and ministry and especially on the cross, then this also is what God was doing in the Old Testament.

God inspired the Old Testament authors to write about Him in a violent way so that He could do the same thing for Israel that Jesus did on the cross. Just as Jesus became sin for us, God became sin for Israel, and in this way, hopefully, stops the cycle of violence from continuing. 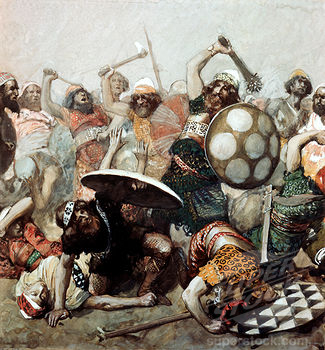 God Takes on the Violence of All Humanity

Of course, God’s action of taking the blame for the sin of His people does not begin with Israel, but with the sin of Adam and Eve in the Garden of Eden. From the very first sin, God takes the blame and violence upon Himself.

He does this in at least two ways.

First, He does not argue with Adam, Eve, and the serpent all implicate Him in their shame. Satan blames God for putting the tree in the garden and for wanting to keep the knowledge of good and evil to Himself (Genesis 3:5). Eve blames God by saying that she was tricked by the serpent (Genesis 3:13), who was in God’s garden. Adam blames God for giving the woman to him (Genesis 3:12).

God, like Jesus after Him, never utters a word in His defense.

But even in Genesis 3:14-19, God takes the blame for the evil that comes upon the world as a result of Adam and Eve’s sin. Many interpret these verses as God cursing the serpent, the man, the woman, and the ground.

And while a surface reading of the text does seem to indicate that this is what happens (although the word “curse” is never used in connection with Adam and Eve themselves), a more careful reading of the text reveals that God is more likely just describing the natural consequence of their decision to rebel against Him and hand dominion of the earth over to Satan.

Yet by pronouncing what will happen as a result of sin, God takes the blame for it.

t appears as if He is the one actively causing enmity, strife, sorrow, pain, thorns, thistles, and death.

This sort of pattern is followed throughout the rest of Scripture. People sin, bad things happen, and God takes the blame.

When people see God taking the blame for the violence and evil of His people (sometimes by “commanding” them to do it), they feel that they must somehow justify the violence and explain how it is really “good.” But this is the wrong approach. God is repulsed and saddened by the destructive violence, which is why He takes the blame for it. But He knows that by taking the blame upon Himself, He will hopefully stop the cycle of violence from continuing, for while a person might retaliate in violence against a violent neighbor, how does one retaliate against a violent God?

When we look at what Israel does in the Old Testament and are repulsed by it, we can know that we are feeling the right thing, for this is what Jesus did on the cross.

So also with God in the Old Testament.

If we despise what He is described as doing and are tempted to reject and forsake those shameful depictions of God, then we are feeling exactly what God wants us to feel.

Rejection of the violent portrayals of God is good and godly because God is not violent.