You are here: Home / Redeeming Theology / 3 More Reasons Good Works Do Not Prove that You are a Christian 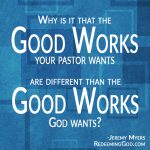 Last week I wrote that good works are not the necessary result of justification. Many Christians say that if you are truly a Christian, you will have the good works to prove it. I argued in last week’s post that this is not true. 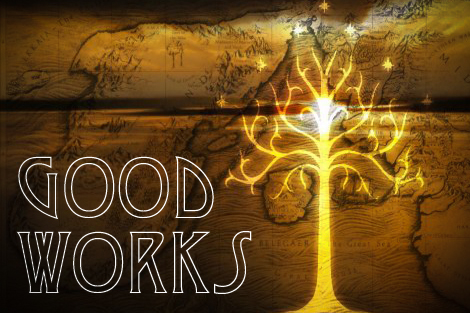 Some people in the comments of last week’s post noted that Christians “good works” often get defined by those in charge. This is true. If we are looking for “good works” in the life of a person to determine whether or not they are a Christian, what good works should we be looking for?

Usually, the good works we look for include things like attending church, daily Bible reading and prayer, tithing to the church, and not using bad words. 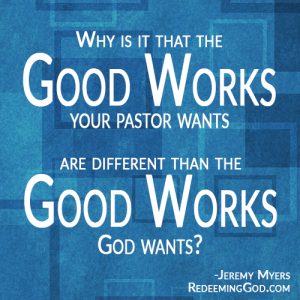 But beyond this, it is quite possible that the good works that we do perform might not be all that evident to others (or even to ourselves). We may not even realize we are doing good works.

In Matthew 25:31-46, for example, the people who served the hungry, the poor, the sick, and the imprisoned did not realize that they were doing anything “good” for Jesus at all. Their actions and behavior didn’t “count” on the checklist of approved religious good works. But Jesus said that their “good works” were the most important of all, for in serving these other people, they were serving Him.

The mother who gets up every day and feeds her family and cleans her house without thanks or praise from anyone will likely be among the most honored people in heaven, even though nobody in this world would give her credit for doing anything notable or newsworthy. She may not even have the energy to read her Bible, pray, evangelize, or get involved in a local ministry, but she faithfully serves “the least of these” her children, and God sees what nobody else does, and will honor and praise her in eternity.

And it not just mothers.

Most who truly serve God in the ways that really matter to God serve in obscurity, doing things that nobody notices (including themselves).

Another we must be careful about looking to good works as evidence for faith and regeneration is because the closer to God we get, the more aware of our sin we become.

If we are looking at our life and to our good works for evidence that we truly have eternal life, the natural progression of the Christian life will ultimately lead a person to believe that they do not have eternal life.

The more you mature as a child of God, the more you recognize how far from God you truly are.

If you are looking to your good works as evidence that you have eternal life, you are likely to become less sure about it the closer you get to God, rather than more sure.

If Paul were looking to his own good works as evidence of whether or not he had eternal life, as he became more and more aware of his sin he would have become less and less sure that he was truly a Christian. But because Paul knew that he had eternal life through the promises of God alone, Paul was able to increasingly glorify God and praise God with every passing year because he knew that each and every sin was covered and forgiven by God.

If you depend on God’s promises in Scripture, and the faithfulness of Jesus to finish in you what He started, then you will never get tripped up or afraid by the sin in your life, for you will know that God always loves you and always forgives. When you sin, you will be able to shrug it off and keep moving forward with God.

3. Good Works are part of sanctification

When a person first believes in Jesus for eternal life, they are justified. They are declared righteous by God. From that moment on, the process of sanctification begins, which only ends with our death and final glorification in heaven.

It is a very possible that a person can believe in Jesus for eternal life and then not come to understand many of the sanctification truths that are necessary to understand in order to make progress in the Christians life.

So if a person has believed in Jesus for eternal life, but they continue to live like the devil, the proper response is not to challenge the validity of their faith, but rather to come alongside them an disciple them into some of the truths of what it means to follow Jesus.

They need someone to teach them the Scriptures, to show them what is true of them now that they are members of the family of God.

They need to come to an understanding of their new identity in Jesus.

If a person hears these truths and says they understand them, but they continue to disobey and rebel, then we can say that they are living in rebellion or have failed to understand the truths they have been taught, but one thing we cannot say is that they didn’t really believe in the first place.

Maybe they need someone to come alongside them and show them how damaging and destructive sin truly is. They might need someone to say, “Yes, you can go sin all you want … but when you understand what sin does to you, why would you want to sin?”

Many Christians have the false idea that God is a cosmic killjoy out to ruin their fun and keep them from enjoying life. Some good teaching corrects this idea, and shows that far from ruining our lives, God wants us to enjoy our life to the fullest extent possible. The reason He tells us not to sin is because He loves us and doesn’t want to see us get hurt by sin.

So when a person doesn’t have good works, they don’t need to be told that maybe they aren’t a Christian after all; maybe they need to be shown the destructive nature of sin and the life-giving power of following God’s instructions.

If a person claims to be a Christian but lives like the devil, my response to them is not to tell them they are not really a Christian, but rather to engage them in conversation about how they became a Christian and what this means for their life now.

If, in the course of this conversation, I discover that the only reason they think they are a Christian is because they grew up in a Christian family and went to church a few times growing up, then I get to introduce them to the central gospel truth about how eternal life is by faith alone in Jesus Christ alone.

But if, in the course of this conversation, they express the idea that they have eternal life because God gave it to them as a free gift when they believed in Jesus, I will not challenge the validity or reality of such faith, but will instead begin to address sanctification issues with this person.

The person who has been justified but who is not being sanctified doesn’t need to be told they were not justified. They need to be instructed, encouraged, and befriended by someone who can lead them further down the path of sanctification.

Good works, or the lack thereof, do nothing to prove whether or not a person has eternal life. They do, however, help us know where a person might be at in understanding Scripture and how to live as a child of God. They do help us gauge the process of sanctification and how we can partner with others to encourage them in this process.