You are here: Home / Greg Boyd Stole My Book! 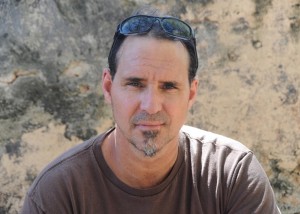 I recently started listening to the podcast of Greg Boyd. In case you don’t know who he is, Greg Boyd is a pastor of Woodlands Hills Church, theologian, scholar, and author of numerous books.

If he is so smart, how come he has to steal my books and ideas and peddle them off as his own?!!!

Apparently, he taught it first, so I could be accused of stealing his ideas.

I take it all back. Sorry, Greg!

Here is what happened…

When I started listening to Greg’s Podcast a few months ago, I also started checking out his blog every once in a while at ReKnew.org.

A while back, he posted a video in which he talks about a sermon he preached back in July. Apparently, he suggested something controversial in that sermon about how to understand the violence of God in the Old Testament. This led one lady to think he was falling into the Marcion heresy of rejecting the entire Old Testament, and so he posted this video in response to her question:

I watched the video on Friday night. As he summarized some of what he taught in that sermon back in July, I thought to myself, “Hmmm… this sounds surprisingly similar to what I have been writing about in my recent series on how to understand the violence of God in the Old Testament and especially in relation to what Jesus did on the cross.”

So, I went and downloaded the sermon, and listened to it yesterday during my commute to work. The Sermon is called “God’s Shadow Activity” and you can listen to it here. OR, if you prefer reading, check out the sermon transcript.

As I listened to the sermon, I noticed that Greg’s way of approaching the subject was somewhat similar to my approach. He wants to maintain the inspiration and inerrancy of Scripture, and he wants to interpret the actions of God in the Old Testament through the interpretive lens of Jesus Christ — specifically what Jesus did on the cross.

As he went through his sermon though, I was not sure that he and I were arguing the same thing. He seemed to be arguing more for God’s divine accommodation to human ignorance and sinfulness. He basically argued that God did what He did in the Old Testament because Israel was not ready for the full revelation of Himself which came in Jesus Christ.

I see why Greg would argue this way, and I see the strengths of it, but I am uncomfortable with stating the problem in that fashion. So as the sermon went on, I began to think I was mistaken, that Greg and I were not arguing the same thing at all.

But then, right at about 50 minutes into the sermon (it is slightly more than 1 hour) Greg got into the subject of how to interpret the violent actions of God in the Old Testament in light of the crucifixion of Jesus Christ and how to do this so that we can maintain the inspiration and inerrancy of Scripture. 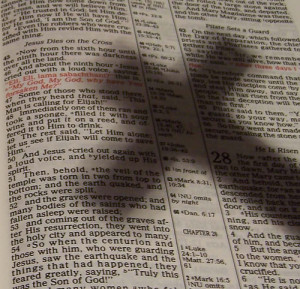 And let me tell you, he NAILED it. He basically said the same thing I have been saying in my series on this blog.

Greg phrased things much differently that I have, but in general, we seem to be saying the same thing. His way of phrasing things is probably more careful, accurate, and theologically sound, but I would say that my way is more bold and courageous. Of course, I have less to lose than he does, and since nobody knows who I am, I will get attacked less.

Greg talked about how on the cross, and out of love for all humanity, Jesus took on the ugliness of sin. And since it is on the cross where Jesus most fully reveals to us what God is like, then we can believe that God’s ugly actions in the Old Testament are similar. He is not “doing” these things, but is taking the ugliness of Israel’s sin onto Himself. He inspires the human authors to write about Him in these ways so that He can paint the outline, or picture (Greg calls it a shadow) of what Jesus will do for all humanity on the cross.

So if you have questions and doubts about what I have been writing recently, I encourage you to go listen to Greg’s sermon. Maybe the way he phrases and explains the issue will make more sense.

As for myself, I was encouraged to see that someone else is thinking along the same lines. Maybe I am not a heretic after all…. or maybe both Greg and I are heretics… ha!

Either way, the argument could be made that Greg didn’t steal my stuff; I stole his! But I didn’t! Like Greg, I have been mulling this over in my head for years, and have written about it numerous times on this blog over the past few years, and only yesterday listened to his sermon where he laid out his proposal.

My book on the subject will most likely be out before Greg’s, but I look forward to reading what he writes when his finally gets published. I think he said his will be titled, The Crucifixion of the Warrior God. My working title is When God Pled Guilty (but this might change). My book will be out later this year (if all goes as planned).

As always, if you want a free digital copy of the book when it comes out, you can get one by subscribing to the email newsletter.

And if any of you know Greg Boyd, tell him it’s okay, he can “borrow” my stuff any time he wants…