You are here: Home / Storms are Not from God 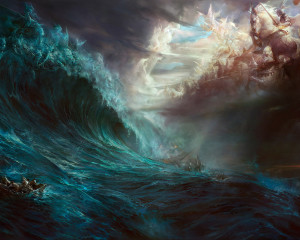 In other words, when destruction comes, it is always a result of a nearly infinite number of factors which we may never know. Often, when evil things occur, we think we know “What” happened and seek to ask God “Why?” But with this explanation of nature having spun out of control, we see that it often answers the “Why?” question, and the question we really do not know is the “What?”

Storms are Caused by a Nearly Infinite Number of Variables 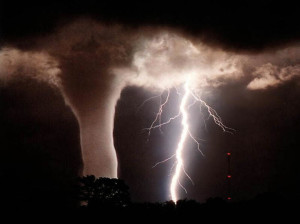 In any one event, we can never know the series of choices and natural occurrences that led up to that particular event. Scientists have often talked about “the butterfly effect” wherein it is entirely possible that a single flap of a butterfly a thousand years ago on the other side of the world sparked off a chain of events that ultimately and eventually led to an F5 tornado ripping through Moore, Oklahoma.

When we add to this the free choices of humans, angels, and animals, it becomes utterly and completely impossible for humans to know with any degree of certainty “What” happened in any given situation. To explain any particular event, we would have to know the exhaustive history of every person, every angel, every animal, and event, and indeed, every thing, in the entire universe. God knows all this, of course, but He also knows it is hopeless for us to understand even the smallest sliver of this infinitely complex creation which has spun into chaos. It is impossible for Him to attempt to explain it to us—which is why He never tries.

When bad things happen, we cannot ever know “What” happened. But we can partially know “Why.” 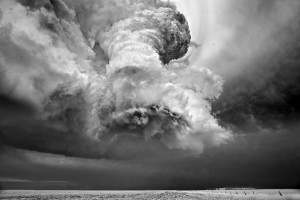 Bad things happen in this world because creation has spun out of control. Due to sin and the rebellion of mankind, the forces of creation are in chaos. In such a situation, terrible things happen.

It is not that God planned them, ordained them, or caused them. His good creation was not intended to function this way, but since He gave humans, angels, and even animals (to a degree) the freedom to make genuine choices, we sometimes use this freedom in ways that are contrary to the will and desire of God, and when we do this, the forces of nature suffer the consequences, and chaos rages over the face of earth, wreaking havoc, destroying lives, and bringing destruction in its wake.

Even though this is not truly an explanation, this second principle of the chaos theory helps explain a lot of the natural violence that goes on in the world.

Storms are not from God; they are a result of nature having spun out of control. God’s involvement is not to send storms, but to protect us from them. When storms come, there are a nearly-infinite number of variables that causes them.