You are here: Home / 4 Shocking Reasons the Bible is Unique (Reason 2)

We are looking at 4 shocking reasons the Bible is unique among the world’s religious literature. Yesterday we saw the first reason, that the Bible reveals mankind’s destructive cycle of mimetic rivalry and the scapegoat mechanism by which we escape the cycle. 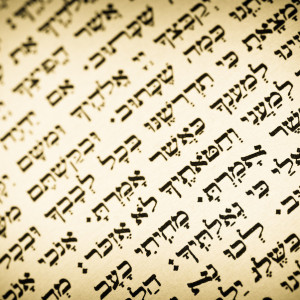 The second reason the Hebrew Scriptures can be considered unique is that they are the writings which Jesus explicitly claimed to fulfill and which He said pointed to Him (John 5:39-40). The Hebrew Scriptures not only contain prophecy about Jesus, but all the stories, hopes, and longings contained within the Old Testament also find their fulfillment in the person and work of Jesus Christ.

You may think, “This is not shocking. Most Christians believe this.”

Yes, but read on. It is about to get shocking…

I would argue that one of the primary reasons Jesus said what He did in John 5:39-40 is because He was speaking to a Jewish audience who taught and believed the Hebrew Scriptures.

Based on my own detailed study of other religious beliefs, practices, and writings, I believe that Jesus could have made such a statement about any stream of religious writings.

If Jesus had been born Chinese, He could have said of the Buddhist Sutras, “These are the Scriptures which speak of me.”

If He had been born a Norseman, He could have pointed to the Poetic Edda, “These are the Scriptures which speak of me.”

If Jesus had been born as a Native American, He could have pointed to their legends and stories passed down from generation to generation and said, “These are the traditions that speak of me.”

I know this is a challenging and shocking idea (some might call it heresy), and I hope to defend this idea in a book someday (I am already compiling notes), but such a claim is not as outrageous as it may initially sound.

Have you ever noticed that nearly all great stories and movies have a common theme and common plot? Almost all great stories, novels, myths, and movies have as their core plot the idea of a person who sacrificially gives of himself for others, to rescue and deliver them from some calamity, and in so doing, suffers great personal loss, but ultimately rises into glory. Is it just pure coincidence that this is the basic storyline about Jesus Christ as well?

Critics of Scripture think so, but I beg to differ.

I think the common storyline which all people around the world and throughout history long for is the storyline which God has placed in our hearts, and which the Holy Spirit is unceasingly whispering into our hearts and minds so that, when we hear the story about Jesus, it rings true in our hearts, and our souls cry in recognition. Jesus is the “true myth” (with the emphasis on true) which proves the validity of many of the themes and longings of men’s hearts which are found in the pagan myths of other religions.

I am not at all saying that the stories about Jesus are myth. Quite to the contrary, the stories of Jesus are some of the truest stories in history. I call them “true myth” because they resemble so many of the pagan stories and myths, and yet, the stories of Jesus are true. This “true myth” idea comes from C. S. Lewis, who said that his realization of Jesus being the fulfillment of the pagan myths which Lewis had studied his whole life is the realization that led him to move from atheism into Christianity.

But more than that, I believe that the Spirit of God moves even today upon the whole earth, whispering and drawing people of every tongue, tribe, and nation to follow in the wake of Jesus. I believe that the gravitational pull of Jesus is so strong, that He pulls all people after Him, whether they call themselves “Christian” or not (No, I am not a universalist).

I think this helps explain why the church often gets it cultural cues from the world.

Much to our shame, though the church should be leading the world in issues like the abolishment of slavery, women’s suffrage, affirmative action, income inequality, taking care of the poor and homeless, and human trafficking, it seems that far too often, the church resists such changes while the surrounding culture cries out for justice and equality.

It usually takes the church thirty or forty years to come around and see that the surrounding culture was right after all. This does not mean that the Holy Spirit was slow in speaking to the church, but that the church is slow to listen to the Spirit. And while the Holy Spirit waits for us to take the earplugs of tradition out of our ears, He goes to the rocks and the stars (often in the form of Rockstars) to have them cry out the message that He is whispering to the entire world.

God is Not Silent

So God is not silent.

He is whispering His truth and His message to the world all the time. And sadly, those who claim to know God the best are often the ones who hear Him the worst.

But thankfully, our deafness does not mute God. God whispers His truth to all people, and this truth shines forth (though often dimly) through the writing of other religions, through literature and art, through music and movies, through shifting political winds, through the longings of men’s hearts and dreams, and through the cries of people for justice and equality  (Stark, The Human Faces of God, 238).

The church that refuses to listen to such movements of God upon the face of the earth is the church that also fails to hear the whisperings of God to their own hearts and minds.

So if this is true, that the Spirit of God whispers the truth of God to all people everywhere so that religion, literature, music, art, politics, and cultural movement all contain echoes of what God wants done in the world, why is it that Jesus came to the Jews to be a fulfillment of their Scriptures? The answer to this question leads us to the next reason the Hebrew Scriptures are unique, which we will consider tomorrow.