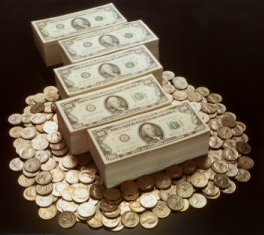 There are about 10 million tithing Christians in America who give an estimated $50,000,000,000 annually to their churches and other charitable causes. That’s $50 billion!

Arthur Sido at The Voice of One Crying Out in Suburbia alerted me to this study, which was originally reported on Christianity Today, and he asks how churches spend this money. He says this:

This gets back to the broader of issue of our love and indeed worship of money in the church, an idolatry that is a near perfect reflection of the broader American cultural obsession with money. I absolutely affirm that we have a serious problem with how money and the church relate but I don’t think it is the same problem we hear about so often. We don’t so much have a giving problem in the church, what we really have is a spending problem. Where is our spending as the church focused? Is it outward or inward and which is more Biblical?

The New Testament church was outward focusing in….

The New Testament church was not concerned with…

That is right on target! (Go read the rest of the article here: Are We Outward Focused or Inward Focused? Follow The Checkbook To Find Out)

I have written similar ideas before about how the church spends money it receives from tithing, and what could be done with this money instead (e.g., How the Church Can Solve the World Water Crisis, Liquidating our Property, and Money, Missions, and Ministry.

What if the churches around the country took JUST ONE TENTH of the tithing money they bring in in tithes every year, and put it toward rescuing young girls caught in human trafficking? If we tithed on our tithing income, we could give $5 billion every single year to some cause. What sorts of causes?

Though there are thousand things we could do with this tithing money, just take one example that has been heavy on my heart in recent years… rescuing girls from human trafficking.

A rescue center was recently started in Seattle called “The Genesis Project.” (It is featured in the movie, Rape for Profit.) As far as I can tell from their financial statements, they started the project and funded it for well under $1 million (2011 Tax Return, 2012 Balance Sheet). To date, they have rescued 87 human trafficking victims.

So imagine with me…. if churches around the country decided to use just 10% of the money they bring in to help start and run other centers like The Genesis Project, we could start 5000 of these centers…. in just one year!

This is just one example. Obviously, there are large number of worldwide needs that could be addressed. World hunger. Water needs. Health and humanitarian disasters. Schools. Orphanages.

Churches often look at these worldwide problems and say, “It’s too large!” But then we go spend billions of dollars on buildings, parking lots, and soundboards.

I am convinced that most of the world’s problems could be solved if we in the church just spent our tithing money in different ways.

Imagine what the church could do with $50 billion if we decided that nicer buildings, better parking lots, and newer soundboard were not a priority? If Jesus had $50 billion every year, how would He spend it?