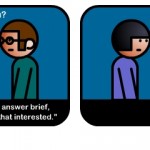 Second a comic strip from The ongoing Adventures of the ASBO Jesus. (Subscribe to this comic blog if you don’t already.)

Finally, a quote from Vince Antonucci’s book I Became a Christian and All I Got Was This Lousy T-Shirt

(p. 81). Prior to this quote, Vince writes about how Moses glowed after he met with God, and how we can “glow” too if we meet with God.

But many of us, most of the time, are not glowing. And when we aren’t glowing, like Moses, we cover our disappointment with a veil. We don’t put on a literal veil; we use a veil of smiles and denials. Christians are famous (or infamous) for this. We wear fake, plastered smiles as a twisted badge of honor, pretending that everything’s great all the time. We say things like, “It’s another great day to praise the Lord!” “This is the day the Lord has made!” What? No, nothing’s wrong! God’s blessings just keep getting better every day!” “God is good all the time!” We hide our true disappointment. 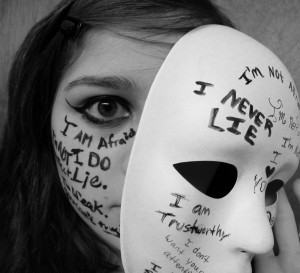 3. If during the greeting time, someone asks you how you are doing, and when you answer “Terrible” they smile, nod their head, and say, “That’s nice,” … you might be in a fantasy church. (This actually happened to my wife!)

4. If you are in a church where people never seem to sin, have fights with their spouse, get speeding tickets, have trouble with lust or alcohol, or have questions and doubts about what the pastor preaches … you might be in a fantasy church.

5. If all you ever hear from the pulpit is how great it is to be a Christian, and how God will supply all your needs and take care of every problem … you might be in a fantasy church.

(If you can think of others, please post them in the comments below!)

If you find yourself in a fantasy church, beware!

Trying to be real and authentic in such a place will only get you hurt more deeply. The best thing a person can do who finds themselves in a fantasy church is to leave quietly and find a group of people with whom they can be authentic, open, and honest (even if they are not all Christians!).

One of favorite Christian music groups, Casting Crowns, has experienced this also, and sings about it in their song “Stained Glass Masquerade”:

But Ron’s rebuttal is what really made me think. Ron argued that we all live in a fantasy world. Everything we see on television is fantasy and does not match up with reality. Most of what we see and read in books and magazines is hyped-up, glossed-over, air-brushed fiction. 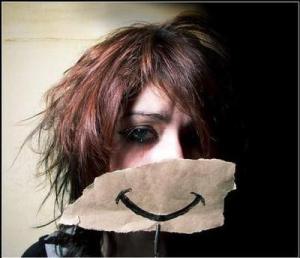 As my wife and I were talking about this, she made the observation that this fantasy-life fiction is magnified in most churches.

The Fantasy World of Church

We seem to think that since the Bible talks about peace that passes understanding, joy in the midst of trials, contentment in times of need, faith in the face of fear, and happy lives full of holy ambition, that if we don’t have these things, something is wrong with us.

And when we look around at others on Sunday morning, and sing the happy songs, and listen to the motivating sermon, we are tempted to think, “Everybody else seems to have what we are so loudly proclaiming. I better act like I do too, or they will think something is wrong with me.”

The reason is that most people in most churches don’t know that everyone else is in just as much pain as they are. Most people wear painted smiles to church. The suits and skirts hide scars. And the pastor isn’t really that excited about God; he’s just high on caffeine (I’m speaking to myself there!).

Most people are afraid to be real and authentic at church because then people will think they’re unspiritual. 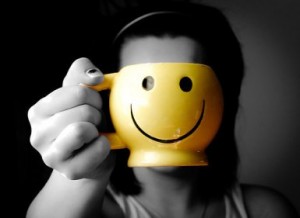 One thing I have learned in times of crisis is that God can take our anger. If we feel like yelling at God, it’s okay… He can take it.

My wife and I were discussing this and she talked about how it is just like our children.

Children often get angry at their parents for not giving them something they really wanted (like candy before dinner), or taking something away that they had (like a sharp knife). The parents, if they are good parents, do this because the parent sees the bigger picture and knows what is best. While we don’t enjoy having our children upset at us in such situations, we can handle their anger because we know that we did what was best. 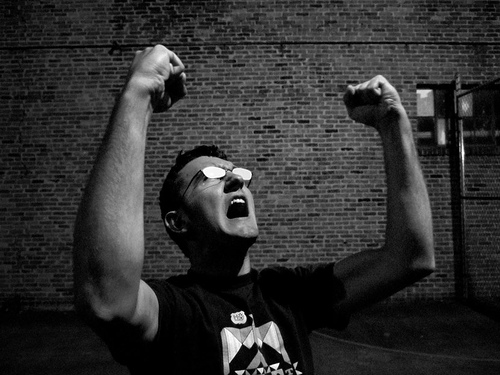 Yelling at God our Father

Similarly, we are God’s children. As our Father, He sees the big picture and knows what is best for us. We may get angry and upset, and if we do, He can take it because He knows we just don’t understand. I don’t think such anger is sinful or carnal, but just anger from ignorance.

God would rather have us come to Him in anger than run from Him in anger. When we are angry at God, but try to hide it, this doesn’t please God, for this is just a form of pious dishonesty. Do you feel like yelling at God? Don’t hold back! Tell God what is wrong.

Yesterday, one of my daughters was angry at me, and I couldn’t figure out why. As I tried to figure out what had happened, I gently probed her with questions. But rather than answer my questions, she just kept saying “Nothing!” No matter what I asked, that was her answer. This is how we act toward God when we don’t vent our anger at Him, and instead just clam up about what we’re feeling.

Yelling at God is a healthy spiritual and relational practice.

The Psalmists all understood this, and in the Psalms, we encounter some of the most angry writing in all of Scripture, and much of it is directed at God. The Psalmists had raw emotions and were not afraid to vent at God. If you ever feel like yelling at God, I highly recommend you read some of the Psalms and yell at God along with the Psalmists.

God wants to be with us in our pain and anger, especially if He is the one who caused it. This is because going to God when we are angry and frustrated at life and at Him is an indication of our love for Him.

Go ahead. Yell at God. Curse if you have to. There is nothing you can say that God hasn’t heard already… It’s not like God has virgin ears. Tell God your blasphemous thoughts. You have permission to be honest with God about your thoughts and your feelings.

God always prefers angry honesty over the sullen silent treatment. So yell away.

In my own experience, after I have yelled at God, I have often “felt” His arms around me afterward, saying, “Thank you for letting it all out. I was waiting for you to be honest with me. Now, let’s talk about it…”

What is your experience with yelling at God? Have you ever done it? How did you feel afterward? Did Christians condemn you for doing so? Did God? Share your experiences in the comments below.

Can I pray when I’m angry at God?