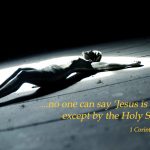 Therefore I make known to you that no one speaking by the Spirit of God calls Jesus accursed, and no one can say that Jesus is Lord except by the Holy Spirit (1 Cor 12:3). 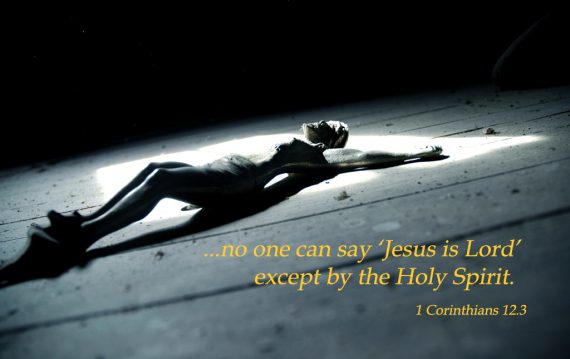 In 1 Corinthians 12:3 Paul makes two opposing statements which have led to much confusion among Christians.

Now, I just tried it, and I was able to say both statements as I read this verse out loud. Go ahead, you try it too. I bet you can verbally express both statements.

Similarly, I guarantee that if you ask an atheist or even a Satanist to say both statements, they will be able to say both as well.

Certainly the same thing was true in Paul’s day as it is in ours.

So 1 Corinthians 12:3 is definitely not a way to determine who is a Christian and who is not.

But what about demon possession?

Here too, it seems that there are times in the gospels where demons recognize and verbally stated the identity, power, and authority of Jesus Christ. There may not be any specific examples of demons saying “Jesus is Lord” but to say “Jesus is Lord” is to verbally recognize His power and authority, so to call Jesus “the holy one of Israel” or that Jesus is “the Son of God” (cf. Matt 8:28-29; Mark 1:24).

I wrote here about 1 John 4:2-3, which teaches a similar truth. No, Paul is not teaching in 1 Corinthians 12:3 about how to determine who is demon possessed.

So what did Paul mean when he wrote 1 Corinthians 12:3? 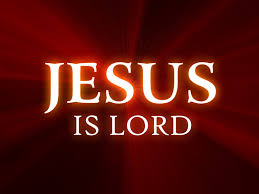 The letter of 1 Corinthians is focused around some issues and questions that had arisen in the Corinthian church. When Paul sets out to address the other issues and questions, he begins with a short summary of what the issue or question was (cf. 1 Cor 7:1; 8:1; 16:1). Chapters 12–14 deal with the issue of spiritual gifts, and ultimately, the gift of speaking in tongues (1 Cor 14), and so 1 Corinthians 12:1-3 is apparently the opening summary statement of what issue or question the Corinthian Christians were facing.

Since this is so, 1 Corinthians 12:3 likely provides an indication of what some of the tongue-speakers were saying. It appears that some of these “super spiritual” leaders were speaking with ecstatic utterances and in the process, saying things like “Jesus is accursed.” When challenged about these words, they claimed that they were speaking by the Holy Spirit and could only say what the Spirit gave them to say.

But why would people who are speaking in tongues say that Jesus is accursed?

So what is it that these “super spiritual” ones in Corinth were claiming when they stated that Jesus was accursed?

Were they claiming that Jesus was separated from God and was spending eternity in hell? This idea is doubtful, since the resurrection of Jesus and His glorification to the right hand of the Father pretty clearly refutes such an idea (Of course, some were arguing that there was no such thing as a resurrection. See 1 Cor 15:12).

No, what seems most likely in light of other uses of anathema in the Bible (See my Gospel Dictionary Course for explanation of these texts) is that certain Corinthian teachers were saying (while supposedly under the influence of the Holy Spirit) that the reason Jesus died is because He was suffering the consequences for sin, or for living in a sinful, human body.

The Corinthian Christians suffered from an early form of Gnosticism where they saw a deep separation between the physical and the spiritual worlds so that what happened in one did not affect the other. One related belief was the idea that the physical world was evil and the spiritual world was good. Therefore, if Jesus had a truly human body, then it must have been evil or sinful, and if so, then Jesus was accursed and died as a sinful human in the flesh so that God could set Him free into the spiritual realm. 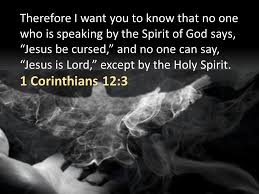 Paul spends much of his time in his letter arguing the exact opposite. In fact, this is partly why Paul goes on in 1 Corinthians 15 to argue about the physical resurrection of Jesus. Paul wanted to show that the physical world, and our physical bodies, were not inferior to the spiritual, but were partnered with the spiritual to accomplish God’s will in this world (John argues against similar beliefs in 1 John).

Jesus did have a physical body, and He was raised with a physical body, but this does not mean that He was sinful or accursed, as some of the teachers in Corinth were claiming. And even though they claimed to be “speaking by the Spirit” when they taught such things, Paul says that when people are speaking by the Holy Spirit, they will not say “Jesus is accursed” but rather, “Jesus is Lord.”

So 1 Corinthians 12:3 is not a litmus test for who is a Christian and who is not.

It is instead Paul’s introductory summary statement about some of the false ideas that various leaders in Corinth were teaching. It is also possible that the Corinthian leaders were saying such things in an attempt to explain Deuteronomy 21:23 (which Paul mentions in Galatians 3:13).

What do you think about 1 Corinthians 12:3 and the explanation above? Leave your comments below!

I taught recently on Luke 2:40-52 and indicated in my message that Jesus learned the Scriptures and learned wisdom just like any human. Just as He grew physically, He also had to grow in knowledge, wisdom, and spiritual strength.

That Jesus learned seems pretty clear from verses like Luke 2:40 and 52 where it says that Jesus grew in wisdom and stature and in favor with God and men. You can see an old version of a sermon I taught on Luke 2:40-52 here. 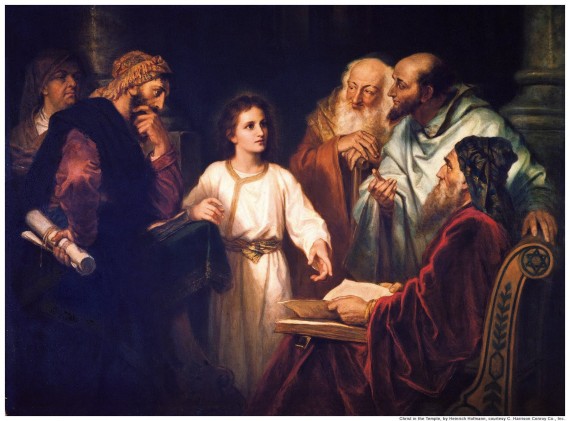 I also pointed out in that message that when Jesus went to Jerusalem at the age of 12 with his parents, He went to the Temple and listened to what was being taught and asked questions (Luke 2:46). Finally, I mentioned Hebrews 5:8 which indicated that Jesus learned obedience through what He suffered.

After the study concluded, I had several people challenge me on the idea that Jesus had to learn anything. They argued that since Jesus was God, He knew everything, even from birth, and so didn’t have to learn from His parents, from reading Scripture, or from anybody at the Temple in Jerusalem.

Such an idea shocked me. I have never heard such a thing before. Have you?

I asked if Jesus knew how to speak all languages when He was an infant, and was told that yes, He did. He didn’t have to learn how to talk, but that He “hid” His ability until it was normal and natural for a child to speak. They said that His parents didn’t teach Him anything about the Scriptures and that He never had to attend school or a Jewish synagogue to learn how to read or to learn what the Scriptures said. Because He was God in the flesh, He just knew it.

When I pointed out that Luke 2:40 and 52 says that Jesus grew in wisdom, they said that this just meant that Jesus became known for His wisdom, as is indicated in Luke 2:47.

I told them that to me, this sounds a lot like the ancient Gnostic and Docetic heresies which taught that Jesus wasn’t fully human. After all, isn’t learning, growing, and developing in knowledge and wisdom a central element to being human?

At one point in our discussion, I said, “Well, it seems logical that if Jesus was fully human, then He had to learn.” Their response was, “I don’t use logic. I just use Scripture.” I just about broke out laughing. It seemed pretty obvious to me that logic was not being used. Ha! One guy also kept saying, “I don’t speculate about Scripture. I just believe what it says.” This is the old “The Bible says it; I believe it; that settles it” cliche which I wrote about a while back. People like to believe that they are just believing the Bible, but they don’t. I don’t either. We believe what we think the Bible teaches. Some of what we believe is truly what the Bible says, ans some of what we believe is a misunderstanding of what the Bible says. The trick is knowing which is which…

This group also strongly objected to the idea that Jesus might have attended a Jewish synagogue as He was growing up, and also later in life. I pointed out that Luke 4:16 pretty clearly indicates that Jesus had a tradition of attending the synagogue, which probably went back even into His childhood. They said, “Well, even if He did go, He didn’t go to learn anything. Even if you are right that Jesus had to learn, there was nothing He could learn from them.”

“…You do know Jesus was Jewish, right?” I asked.

They responded that they did know this, and we moved on to other topics, but it seemed to me that this was another one of those old mistakes (championed by Marcion who ended up discarding most of the Hebrew Scriptures) where some Christians try to separate Jesus and the apostles from anything Jewish. I believe that such a move causes us to misunderstand most of what Jesus, Paul, and Peter teach. But I digress….

I think Jesus did learn. I think learning is a major element of being human. I think that Scripture pretty clearly indicates that Jesus grew physically, mentally, and spiritually (Luke 2:40, 52). Note that something nearly identical is said of John the Baptist in Luke 1:80. So however a person understand Jesus’ learning (or lack of learning) in Luke 2:40, 52, this same idea must be applied to John in Luke 1:80.

But what do you think? Did Jesus learn? However you answer, what Scriptures and logical arguments would you use to defend your position?

Below is a video where NT Wright addresses this question a bit, and for you scholarly types, here is an article he wrote on the topic: Did Jesus Know He was God? And for you super scholarly types, I recommend Wright’s book, Jesus and Victory of God.