You are here: Home / Redeeming Church / Homeless people are pretty much just like you and me! 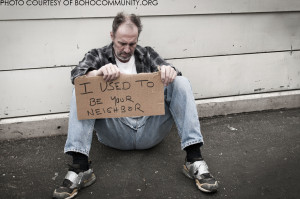 When I was a kid, “homeless” meant that you had lost your job and couldn’t pay your rent so you took turns living with relatives until you found a job. No one I knew lived on the street, under a bush, or in a tent in a canyon. I had never heard of such a thing.

When I grew up, I got married and moved to California where I discovered that there were people literally living in the street, under bridges, and in the canyons surrounding our city.

One fine summer day I decided to go to my favorite beach to soak up some rays. When I arrived I ran into an old friend I hadn’t seen since the previous year.

“Hey Rick. I haven’t seen you around.”

“Yeah, I kind of fell off the map. I lost my job last fall and couldn’t find another one. I lost my apartment and ended up on the street.”

“No. I was living in a sleeping bag under a bridge behind the Warehouse restaurant and spending the day in a park a couple of miles away.”

“Yeah. I’m serious. But it’s worse than that. I almost died in January.”

“You did? What happened?”

“Remember that ice storm we had?” Rick asked.

“I was at the park when it started to rain. By the time I got back to the sleeping bag I had stowed under the bridge I was soaked to the skin. I crawled into the bag and got it wet too. The temperature was dropping and it started sleeting. I started shivering and shaking and couldn’t get warm.”

“Sometime during the night I passed out. The next morning someone found me under the bridge and thought I was dead. They called the cops, who checked me and found out I was still alive, but unconscious. The cops called an ambulance and I ended up spending five days in the hospital. They told me I almost died. My body temperature had dropped below what it’s supposed to be to keep you alive.”

I wanted to cry. How could this have happened to my friend? “Rick, you could have stayed at our house!” I told him.

“I lost your phone number. I didn’t want to bother anyone. I thought it would be a temporary thing. When I started sleeping under the bridge it was only getting down in the sixties at night.”

“Are you still living under the bridge?”

“No. Someone I know ran into me in the hospital and he helped me get a job at a fast food place. After I worked there a couple of months I found another job in my field. I’m back in an apartment and doing good now.”

“Wasn’t there some organization or church that could have helped you when you were on the street?”

“There were these people who fed us lunch every day in the park downtown. I’m not sure who they were, but I don’t think they had any place for me to get off the street.”

“Me and the other homeless people around here.” 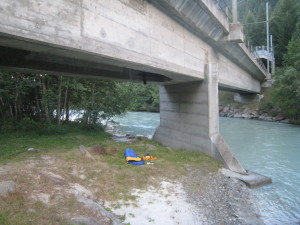 “You’re saying there are other homeless people here?”

“Living in the cracks where you don’t see them. Go downtown and you’ll walk right by them. Some of them are dressed a little shabby. Some of them look like anyone else. If you really want to meet some of them, go to the park downtown at noon. They’ll be there lined up for lunch.”

I was shocked. Homeless people in my town? How had I missed them?

Rick and I spent a couple of hours lying in the sun and talking. That evening at dinner I told Rick’s story to my wife.

After that, we didn’t think much more about it.

A couple of years later a friend asked if I could prepare lunch one day the following week for the homeless. The idea made me uncomfortable. What if I caught a disease from one of them? What would I do if one of them wanted money, or wanted to stay at my house? 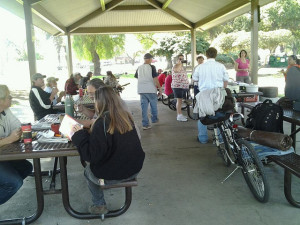 Reluctantly, I agreed to make lunch for about sixty people. I was about as enthusiastic as I would have been if I had been planning to go to Calcutta to visit the slums. I did not know what to expect when I would actually meet sixty homeless people.

When the day to feed the homeless arrived, the people I met, people who had been unknown and faceless to me suddenly were sitting beside me as we shared stew, bread, and cherry cobbler.

I had expected filthy, stinking drunks with whiskey bottles in their hands and baggies of weed in their pockets.

Instead, the homeless people I met were not that much different from a lot of people I knew.

Some were poorly dressed. Some carried a backpack and sleeping bag. A few had shopping carts filled with their belongings. Several were probably under the influence of drugs or perhaps alcohol. But most of them looked and acted like I thought I might look and act if I were down on my luck.

How can I help people like these? Should I even be helping them? Maybe helping them just encourages them to continue living under bridges. I don’t have the resources to help them get into permanent housing. Shouldn’t the government take care of them?

“Thanks man,” one man said after finishing his lunch. “I want to let you know how much I appreciate this. This is the only time I’ll eat today and you gave me plenty to fill my stomach until tomorrow.” Many of the people who ate the lunch I had prepared said “Thank you, the food was good.” They had good manners, were respectful, well-spoken, and kind.

The homeless people were not that dissimilar to me.

This was quite a shock to me, and I began to ask questions that changed my view of homeless people forever.

How did these people end up on the street?

Do I know people who have ended up on the street?

Do I know people who are in danger of losing their homes?

I thought the poor and homeless lived in large cities like New York and Los Angeles. How many live in my own “backyard”?

I can’t give what I don’t have. But I do have a cup of water and I like these people. That’s a good place to start.

I knew that while I couldn’t save them all, and maybe I couldn’t even save any, I could at least give them a warm meal, a cup of water, or a new pair of socks.

But how do I figure out who among the homeless needs the most help? And how can I determine what the best way is for me to help?

In the following posts we will look at how my wife and I along with a few friends have been answering those questions.

Until then, what sorts of questions do you have about loving the homeless? Leave your questions in the comment section.