The request “Can you prepare lunch for the homeless one day next week?” resulted in the opportunity to meet sixty homeless people, which at the time I assumed were the first homeless people I had ever met. Gradually, however, I realized that I had previously met and known other homeless people, but just didn’t know they were homeless. 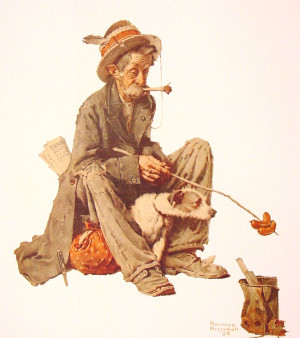 Most of our communities are home to poor people and to homeless people. Somehow I had overlooked both groups of people in the communities in which I had lived. How could that possibly have happened?

I Don’t Know Any Poor or Homeless People, Do I?

Perhaps I had overlooked the poor because my family by today’s standards would have been considered poor. We had a house, food to eat and a car to drive, but not many extras. I never heard anyone call us poor. Our family laughed when we discovered that we were barely above the “federal poverty level” line.

My parents referred to people who were better off than us financially as “rich”. I knew who those people were. They lived in the part of town with the expensive houses.

However, I did not think I knew homeless people.

Sure, I knew about hobos. We lived near the railroad tracks. Hobos appeared at our door and asked for food and sometimes clothing. My mother always gave them something, as her mother always had. They knew the way to our house. However, I never knew where they lived.

I knew about bums and winos. I saw them in the street, usually dressed in ragged clothes. Occasionally they asked for spare change. I also didn’t know where they lived.

I knew about people who temporarily lived with friends or relatives “until they could get back on their feet”, and afford to rent a room, apartment or house. Some of those people were my relatives. But they did have a roof over their heads. I never heard anyone call them homeless.

After that day in the park eating lunch with the homeless, however, I started seeing poor and homeless people everywhere. I assumed there must be an influx of poor and homeless people into my community. As I would eventually realize that what had changed was not who was moving into my community. I had changed. My eyes were slowly adjusting to the reality that is our world.

Soon I knew the volunteers in the homeless programs in our town. I met the woman who ran a local shelter for abused women and children, most of them from poor homes. Within a year or two I knew the people in our community who worked with the poor, the homeless, the abused, the battered, and the overlooked.

We discovered that we like people who live under bridges, under bushes, in canyons, in tents, and on sidewalks, as well as the poor, lonely, and needy who have roofs over their heads. We are friends with the homeless, and friends help friends. So we help our homeless friends.

How can we best help our friends? Future posts about our journey with the poor and homeless will look at some of the ways in which we are answering that question, and how you can too.

Until then, how are you finding ways to help your friends among the poor and the homeless? If you do not yet have any homeless friends, what are you doing to begin seeing them around you?