You are here: Home / Redeeming Church / The Dream of the Homeless 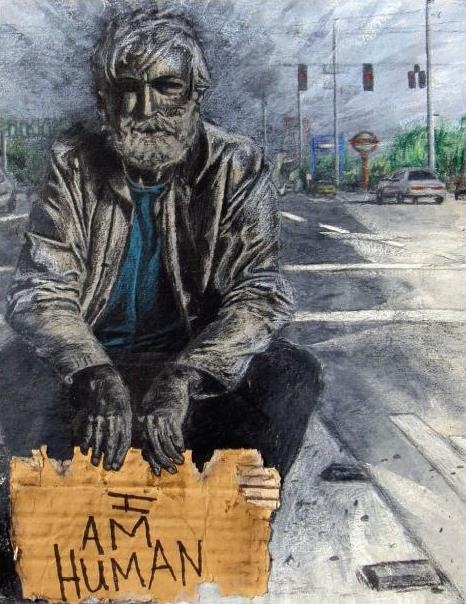 Who are the homeless? What are they thinking as we walk by without looking them in the eye? What do they want from us as they hold their sign at the stoplight while we fiddle with the radio knobs on our car dashboard?

Do the homeless have dreams? Desires? Wishes? Hopes?

What circumstances in life led them to this spot on the cold, wet pavement under the bridge?

If we want to help the homeless, the very first step is seeking to understand who they are and how they think. The best way to do this is by listening to their stories.

Here are a few of the stories I have heard from homeless people in my town as I spent Easter Sunday among them:

“I have a dream,” said the homeless woman sitting on the sidewalk. “I have a dream that I will have a large house that I can fill with children, the unwanted, unloved, and abused children of the world.

“There’s a little five year old girl I know. She gets passed around and used by men.

“There’s also a baby. He can sit up, so someone sets him out on the front steps of the apartment building where he lives. Sometimes people give him something to eat or drink. He’s in the sun when it’s hot. Sometimes he falls over and falls down the steps and gets hurt and cries. If he’s lucky, someone sets him up again.”

“I don’t know. I’ve asked people who she is and no one knows. They say he’s just out there when they come out the door and they never see anyone take care of him. I want to give him a home.

We assure her we will.

We walk around the corner to a group of homeless women sitting under tarps. “Melinda” was busy working on something on the sidewalk.

“I saw you coming down the street and I’m making this for you.” Somewhere Melinda had come up with a small pink foam cross and foam stickers in the shape of hearts, churches, and the words “Joy”, “Pray,” and “Love God.”

“Jesus rose up from the dead on Easter,” Melinda told us. “Here, this is for you to remind you of that. Would you like some tickets to a movie? It’s about a girl that got hurt, but God helped her in all her trouble. I have two extra tickets.”

We accept the tickets and thank her, and give her and her friends water, food, and shirts.

“Happy Easter!” they shout as we walk on to another group of homeless people.

Yes, the risen Lord walks among the homeless, not only on Easter, but also on every day of the week. He is there, among the beauty of those who know and love him, but also in the middle of incredible darkness. 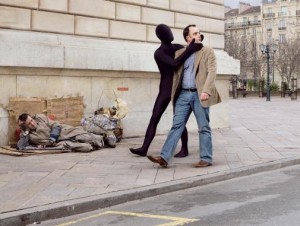 “Six homeless men have been murdered down here lately,” said our friend “Arthur”. We’ve known Arthur for several years. He dreams of starting a business and getting off the street.

So far it hasn’t happened.

“One night I was coming back to my cart and there was a dead man laying right there,” Arthur said, pointing to a small patch of ground planted with bushes. “Someone had bashed in his head and his brains were all over the place.”

“Maybe. I dunno. I was walkin’ around for a couple of hours. It was late and there he was when I came back.”

“Why doesn’t this stuff get in the paper, Arthur?”

“Nobody cares when one of us gets murdered. It’s bad publicity for the city.”

Incredible beauty walks among the homeless, but incredible evil also is their constant companion.

With my little pink cross held in my hand, we round the corner a couple of hundred feet from where the man had been murdered a few weeks before.

“Them damn cops won’t let us play football there in the street,” a couple of them tell me. 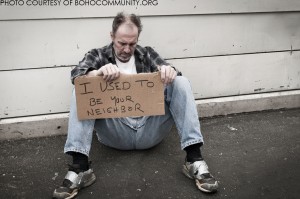 A group of about twenty angry homeless men are milling around. One police cruiser with one policeman inside backed into place in the middle of the street in front of them. The policeman rolled down his window, then opened his door, got out and stood there, facing off with the men.

“Friends, we have sweet grapes, water, and buffalo-wing flavored goldfish crackers for you” we announce as we purposely walk between the policeman and the group of angry men. “Who needs a fresh, clean shirt? I have a bag of them here. My wife even ironed them for you.”

Soon we are handing out food, water, and shirts and the mood of the crowd changes. Only one man continues to taunt and curse the policeman. The policeman tells him to calm down, then returns to the safety of his cruiser while the crowd sat, eating grapes and crackers. Some tried on their new shirts.

“This is Easter,” we proclaim. “Have a good Easter, guys.”

None of these men mentioned Jesus rising from the dead and no one gave us an Easter cross. But no one jumped the policeman and no one got shot, either.

People are murdered there on the street, but others are safe. Jesus is with them both.

Some mothers set their babies on the front steps of their apartment buildings and leave them alone. Other mothers make plans to get off the streets and make a home for the unwanted and unloved children. Jesus cries with and comforts both.

The homeless have dreams … and Jesus dreams along with them.