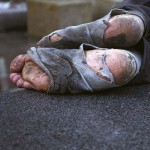 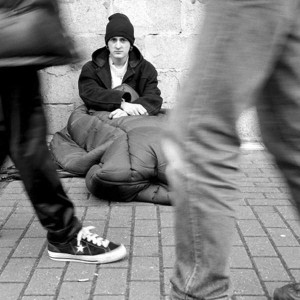 Jesus said that we would always have the poor with us (Matt 26:11).

As a result, we find it easy to conclude that the problem of the poor is too big for us to solve, so we drop a few dollars in the Salvation Army kettle at Christmas and write a check for missions and give it to our local church.

We almost become blind to the poor where we live.

When the recent census revealed that there are over ten thousand homeless people in San Diego, everyone I know thought those numbers must be incorrect. “Occasionally I see a homeless person at an intersection begging for money but surely there can’t be more than a few hundred homeless people in the entire city!”

One church group of which we were a part decided that the homeless were on the streets because of “bad decisions” they had made. The group felt that helping them would only encourage them to stay homeless. The solution they proposed was that “Homeless people should get off their butts and get jobs!”

Their perspective might have changed if they had gotten their butts out of the pews and gone down to get to know some of the homeless in the streets.

Going to the Homeless

Last Saturday our small group ventured to downtown San Diego to an area where several hundred homeless people live on the sidewalk, in the shadow of the ballpark.

Friday had brought a soaking rain. On Saturday the homeless were trying to dry their clothes, blankets and sleeping bags. As several told us, “We’re trying to get dry before it rains tomorrow.” We shared chips and some other prepackaged food we had taken with us and talked to them. Some had been living on the streets for months or years. One man said he had lost his job, had run out of money, and had just joined the ranks of the homeless that day.

We went home thankful for our warm bed and dry clothes.

About lunch time on Sunday the second storm arrived. The rain continued until the middle of the night. The heavy rain woke me up several times that night, and I prayed for the people sitting in the rain on the sidewalk downtown, some without even a garbage bag to cover their heads.

As the rain fell, the temperature dipped into the upper forties and low fifties. As many homeless have explained to us, even though the temperature might be above freezing, being soaked to the skin on a chilly night can lower body temperature and is especially dangerous for those with health problems. If a person remains cold and wet on the streets, hypothermia can set in and the homeless person may die.

Are the Homeless My Problem?

As I prayed for the homeless while it rained, I began to wonder if I had done enough.

We had taken food to the homeless, but I was lying in a warm dry bed and they were sitting on a cold, wet sidewalk getting soaked. We had given them dry clothes, but those clothes were now soaking wet while I had a whole closet full of warm and dry clothes a few feet away.

The problem of the homeless seemed too big for me or our small group to solve.

Was there something more we could do, or should we just give up?

As I lay there, I realized the truth of what Jesus said about the poor.

With this in mind, it would be unfair for only one generation or one group of people to have this opportunity! Therefore, it is a blessing that the poor will always be with us, because now all of us can go meet with Jesus on the streets.

So if you have ever wanted to meet Jesus, now is your chance! Go out and love the homeless.