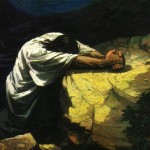 In Matthew 26:39, on the night before His crucifixion, Jesus prayed,

O My Father, if it is possible, let this cup pass from Me; nevertheless, not as I will but as you will. 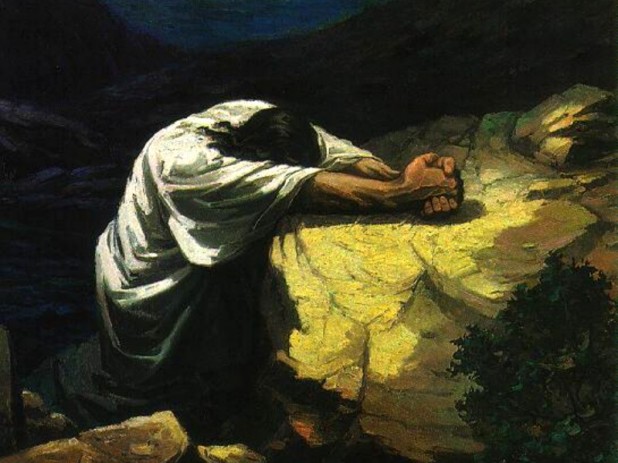 Though none of us can fully comprehend either the physical or the spiritual suffering that Jesus was about to endure, such a prayer by Jesus confuses many people. Up until this point, it seems that Jesus has known full well what He would face on the cross, and went toward it willingly and resolutely.

And yet now it seems that He is praying for a way around the cross. When Jesus prays, “Let this cup pass” is He asking for an alternate route to redemption?

While some pastors and scholars just say that such a prayer reveals the full humanity of Jesus, I am not sure the answer is that easy. I do not think Jesus changed His mind.

Let’s look at the evidence.

First, the plan of the cross had been established from the very foundations of the world. In Ephesians 1:4, Paul writes about this plan. The fact that it would include the slaying of God’s own Son is recorded in Revelation 13:8. Before Jesus was even born, He knew that He must die on earth.

Second, numerous times during His ministry, Jesus spoke of His coming death in graphic detail and referred to it as “drinking the cup.” In Matthew 16:21 Jesus began to teach His disciples that He must go to Jerusalem to suffer and die (cf. Matt 17:22-23; Luke 9:22). He even knew many of the details, that He would be arrested, condemned, mocked, whipped, spit upon, and killed (Mark 10:32-33).

Furthermore, He occasionally used the imagery of drinking deeply from a cup to describe this painful suffering and death He would endure (cf. Matt 20:22-23). Also, in an earlier prayer, He stated that He would not pray for God to save Him from the suffering that was to come (John 12:27-28).

Third, after the prayer in the Gethsemane, Jesus continued to show willingness to drink the cup. In John 18:11, after Jesus had finished praying, and as He was being arrested in the Garden of Gethsemane, Peter tried to rescue Jesus by pulling a sword on the Temple guards. But Jesus stopped Peter, and asked him, “Shall I not drink the cup which My Father has given Me?”

So if both before and after the prayer in the Garden, Jesus knew what His death would entail, and showed complete acceptance of it, how can we understand His prayer in the Garden for the cup to pass from Him? Did He have a moment of weakness? Was He losing His resolve? Was He afraid of the pain? Did He change His mind? The answer to all of these is “No.”

Part of the problem is that we do not understand the Passover imagery which Jesus was using. Jesus and the apostles had just come from eating their Passover meal, during which time they would have drunk deeply from four cups of wine. At that time, the table would usually share one, large, communal cup. The custom was that when the cup came to the place you were reclining, you must drink from it as deeply as you could, before passing it on to the next person at the table.

Before you could “let this cup pass” you had drink deeply from it.

If the was emptied, it would be filled again before being passed on. Often, at the bottom of the cup, there were bitter dregs from the wine. If you were the person to empty the cup, you must drink the bitter dregs as well, before you “let this cup pass.”

So when Jesus prays, “Let this cup pass from me,” He is not saying, “I don’t want to drink it,” but is rather praying, “Let me drink of it as deeply as I possibly can before I pass it on to humanity. Let me empty it. Let me drain it. Let me drink all of it, even the bitter dregs at the bottom of the cup.”

Jesus was not asking God to let Him avoid the cup, but was asking to let Him take on as much of it as He possibly could, and if possible, if it was God’s will, to let Him drink every single drop, down the bitter end.

This is how the statements about not doing His own will, but the will of God, are to be understood (Matt 26:39, 42). Jesus was not praying to bypass the cup of pain and death, but was praying to end the reign of sin and death once and for all, in Himself, on the cross. Jesus was praying to finish the plan, to bring it to completion. Was He looking forward to the pain and suffering? Of course not. But nor was He shying away from it.

The Surprising Will of God

The seeming conflict between the will of Jesus and the will of God in Matthew 26:39, 42 was not, I think, in the will of Jesus, but in the will of God. It was God who was “struggling” with what to do; not Jesus. God was having to face a decision on whether He would let mankind suffer for our own sin, or if He would take all that sin and pour it out upon His one and only, perfectly righteous, everlasting Son. If He did that, their eternal relationship would never be exactly the same.

Which of us could ever make such a decision as God made here? He had to decide between His own Son, and all of wretched, sinful, rebellious humanity.

So Jesus, in His prayers to His Father, is saying,

If Jesus was uncertain of anything, it was not His own will to drink of the cup, but of the will of God to take the sin of all mankind and pour it out upon His Son. In His prayer, Jesus was asking God to finish what they had started.

This is what I love so much about Jesus. He truly is our Great High Priest, the Mediator between God and man. He did not try to pray Himself out of the pain and suffering of the cross at the last minute. No, He embraced it to the very end, praying and pleading with God to stay the course, despite how painful it would be for both of them to sever their relationship, and make Jesus become sin for us (2 Cor 5:21).

Oh, and by the way, I don’t think God hesitated for a second either. Jesus says that if we have seen Him, we have seen the Father. Therefore, God the Father loves us just as much as Jesus does. There was never any question about what would happen on the cross. Jesus did not change His mind about the cross, and neither did God the Father. Together, they endured the cross, despised it’s shame, so that Jesus could once again sit down at the right hand of God the Father in heaven, and we could be offered eternal life.

Some exegetical evidence for this view on “Let this cup pass”

I am one of those individuals, however, who thinks that in cases such as the Passover meal, and in His prayers, Jesus spoke in Hebrew. What we have then in the Gospels is a Greek translation from the Hebrew that Jesus spoke. There are numerous references in the early church to a Gospel written in Hebrew.

So in Matthew 26:39, in place of the Greek word parerchomai, the Ginsburg Hebrew New Testament contains the Hebrew word abar, which means “to pass through.” This is crucial word in the account of the Passover (cf. Exodus 12:12, 23). In that account, the Lord “passed over” (Heb. pesach), the houses of the Israelites which had blood of the lamb on the doorpost, but He “passed through” (Heb. abar) the houses of the Egyptians which did not.

It appears that when Jesus prayed to let this cup pass, He used the word abar. He was not praying to escape the pain and suffering, and have it pass over (pesach) Him, but was praying to take it on fully, to experience the pain, death, and suffering of the cup of God’s wrath.

This fits perfectly with the Passover imagery. Jesus, as the Lamb of God slain before the foundations of the world, takes on the full brunt the punishment for sin, allowing His blood to be put on the doorposts of all who believe in Him, so that punishment passes over them.