You are here: Home / Redeeming Theology / Does Your Passover Meal include Meat Sacrificed to Idols? 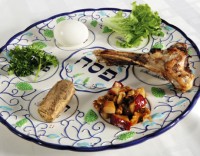 A reader recently sent in this question about whether or not Christians should celebrate Jewish feasts such as Passover.

Some families in my church like to observe the Passover and other Jewish feasts. Is this okay?

I have two responses:

(I should have been a politician…)

It is Okay for Christians to Celebrate Passover

My family and I do enjoy a Passover Meal (sometimes called the Seder). We have the horseradish, lettuce, salt water, unleavened bread, boiled eggs, lamb bone (though we use a chicken bone…), and wine (the kids drink grape juice).

And we do most of the activities also. We put three pieces of Matzoh in a napkin, take out the center one out, break it, hide it, and let the kids find it. We go open the door for Elijah. We tell the story of the first Passover, and we read Scripture. It is a wonderful time, and the family looks forward to it every year.

The Passover meal is full of rich symbolism about Jesus, as are all the Jewish feasts.

So in this sense, I am fine with Christians celebrating Passover and the other Jewish feasts, especially if they take the time and effort to not just celebrate the feast, but to show how it reminds us of Jesus and points to what He did (or will do) for the world.

Now let’s look at the other side of the coin.

It is Not Okay for Christians to Celebrate Passover

The only time I would ever counsel Christians to not celebrate the Passover is when they think they have to, and think that all other Christians must celebrate it also.

And sadly, this sort of thinking is becoming increasingly prominent in some Christian circles and churches.

There are numerous forms this argument takes, but one or more of these points are usually brought up:

When I hear these sorts of arguments for observing Passover and other Jewish feasts, alarm bells begin to sound, and a whole host of Scriptures from the New Testament begin the “Hora” (the Jewish circle dance) inside my head.

I firmly believe that if Jesus had not been Jewish, He would not have celebrated the Jewish holidays. Instead, He would have celebrated whatever holidays were part of the culture He was in, and rather than show how He fulfilled the Jewish holidays, would have shown how He fulfilled these other cultural holidays of whatever culture He was in.

Let’s say Jewish was born in the United States sometime during the last century. Jesus would have celebrated Thanksgiving, Independence Day, President’s Day, Martin Luther King Jr’s Birthday, and other similar holidays. On Thanksgiving, He would have reminded us to give thanks to God for all the blessings we have been given. On July 4, Jesus would have told His disciples about the freedom we have as His followers, and the independence from sin and slavery to the devil. On President’s Day He would have spoken about how our only true Lord and Ruler is Himself, Jesus Christ. On Martin Luther King Jr.’s Birthday, He would have reminded us about the hope and dreams He shared with Martin Luther about equality for all in the Kingdom of God.

You see how this goes? Jesus is about the redemption of all things. He shows us how He is the fulfillment of all hopes and dreams and expectations. Jesus fulfilled the Jewish holidays, yes, but He also fulfills the United States holidays, the German Holidays, the Japanese holidays, the Brazilian holidays, the Russian holidays, etc, etc. (This is some of what I wrote about, by the way, in Christmas Redemption). I could write so much about this, but will refrain for now. (See posts about Hanukkah, Pagan Holidays, Easter, Mithras)

As far as the Scriptures dancing the Hora, some of them include Acts 15:20 where the Jewish leaders in Jerusalem gave instructions for what the Gentile believers should do, and they only gave them three things, none of which included the Jewish feasts. The three things they did include were simply to maintain fellowship between Jews and Gentiles, because these three were especially abhorrent to Jews.

I think of pretty much everything Paul wrote in the book of Galatians.

I think of Colossians 2:16-17 where Paul talks about Holy days, ceremonies, and Sabbaths, and says that we must not condemn others on the basis of whether or not they practice these things, because they were simply a shadow of the reality, which is Jesus Christ. In other words, if we have the real thing, Jesus Christ, why would we want to go back to the shadow? The answer is, we wouldn’t!

I think of 1 Corinthians 5:6-8 where Paul uses the symbolism of Passover to show that the physical meal is not what is important, but the spiritual reality that is in Jesus Christ and our unity together with Him.

I think of the book of Hebrews, where the author is intent to show that Jesus Christ is far superior to anything which was offered under the Mosaic Law, and after we have Jesus, to go back to such things is sheer folly.

There are other Scriptures as well.

So if you are invited to a Passover meal by a person who thinks the meal is required for followers of Jesus, and that if you do not go, you are a sub-par Christian and are missing out on a blessing of God, I recommend you take a pass.

Otherwise, if it is a Passover meal to remember Jesus Christ, do whatever you want. There is no harm in it, but it is not required either.

Ultimately, I think it comes down to your personal conscience. If you want to observe Passover, go right ahead. If not, that’s fine too.

But whichever way you decide, make sure you do not judge and condemn those who choose differently.

So What does Passover Have to do with Meat Sacrificed to Idols?

In the end, Passover and the other Jewish Feasts are like an issue that many Christians in the early church struggled with: meat sacrificed to idols (Romans 14). There were two basic approaches to this issue. Some thought it was okay, and others thought it was a sin.

In writing this letter to the Corinthians, Paul pretty much seems to shrug his shoulders and say, “Do whatever you want, but whatever you do, stop judging and condemning one another about it and love each other instead.” (Rom 14:13, 19).

Oh, and by the way… along with the Passover Meal, my family also decorates and hides Easter eggs, and we give each other jelly beans, chocolate, and other small gifts. This practice certainly isn’t biblical. To the contrary, it has pagan roots. But we think that along with Passover, Jesus has also redeemed the pagan holiday of Easter, which used to be a holiday for Ishtar, a sex goddess.

Redeemed! How I love to proclaim it!
Redeemed! By the blood of the Lamb!