You are here: Home / Redeeming Theology / God Knows What it is Like to Experience the Death of a Child

A reader recently sent in the following questions about the death of Jesus as the Son of God and how it affected God the Father. Specifically, they wanted to know if God knew what it was like to experience the death of a child. Here is the question:

I am a believer, but I am troubled by an atheist’s questions. I was talking to an atheist the other day, and he said that God doesn’t know what it’s like to experience the death of a child because he knew all along that Jesus would rise in three days, so he only lost him for the weekend! He also questioned that if God is Jesus, why did he beg to be saved from the cross when he was in the garden? Also, shouldn’t Jesus already have known he would rise again in three days? Why did he ask God, “Why have you forsaken me?” Wouldn’t he know that he’s only going to be dead three days?

I am answering these questions over the course of four blog posts in the following order:

So in this post, I will look at two ways that God does indeed know what it is like to experience the death of a child, and in fact, knows better than we do what it is like.

We can see this in at least two ways. 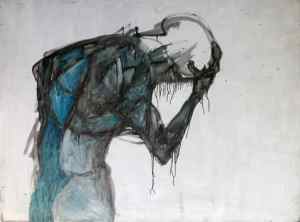 Quite to the contrary, it could be argued that in the death of Jesus, God experienced greater loss, greater pain, and greater suffering than do human parents.

2 Corinthians 5:21 says that on the cross, Jesus became sin for us. He took our sin upon Himself. While it is nearly impossible to understand exactly how this happened or what occurred, we can know that whatever it means, it would have caused excruciating anguish and torment for both God the Father and God the Son. We have lived with sin our entire lives. We have become accustomed to it. We cannot imagine an existence without sin.

But God is holy, righteous, and good. He is love and light. What then must it mean for Him to knew no sin to become sin for us? What must it have been like for God to see the holiness of His one and only son get exchanged (or covered, or extinguished, or whatever verb best fits with your theology of the atonement) with the totality of all sin ever committed by every human in the history of the world? We humans cannot imagine the suffering and the torment that this must have caused.

Worse yet, the sin that Jesus bore caused a rift to open in His relationship with God the Father. The sin caused a separation. This is why Jesus cried out from the cross, “My God, My God, Why have you forsaken me?” This is the cry of God the Son experiencing for the first time in eternity a separation from God the Father. The suffering and sacrifice was so great, that it shattered the eternal relationship between God the Father and God the Son. This also is something we humans cannot imagine. We are pained when separated from our loved ones whom we have known for several years, or several decades. But God the Father and God the Son have existed eternally in relationship with one another. Sin caused them to be separated.

And while both God the Father and Jesus the Son knew that Jesus would rise again, there was a pain in their separation that can never be matched by the most painful loss which any human being can experience.

But God is infinitely “higher” than humans in every way, and therefore, must experience an infinitely greater loss at the pain, suffering, and loss of His Son, even though He knew He would be reunited with His son shortly. The knowledge of the resurrection did not dissipate the pain and suffering that God experienced when Jesus bore the sin of the world into death.

Again, think about the situation as a parent. Let us say that you knew your child was going to die, and that your child would rise again from the dead in three days. But before your child died, they would have to experience the most excruciating and painful torment ever imaginable. Would their pain and death be any easier for you to handle, even knowing that they would rise again in three days? No, I do not think so.

How much more so for God? Though the situation was a bit different when God lost His son than when parents lose their children, it can be argued that God knows the pain of suffering and the torment of a lost loved one in deeper ways and with greater agony than do human parents. God does know the pain of losing a child. Since death is the antithesis and complete opposite of everything that is “God” for Jesus to die would be the greatest and more terrible experience of the death of a child, especially when the child is the Son of God.

But there is another way that God has experienced the death of a child.

2. Every Person is One of God’s Children

We sometimes seem to forget that every single person is (in some sense) one of God’s children. Even those who rebel against God and who never return to Him are viewed by Him as His lost and wayward children. He looks after each and every person on earth throughout history. He looks earnestly down the road every day, hoping that his wayward children will return to Him.

And when each and every person dies, whether young or old, God suffers through their death. Death, remember, was not God’s plan or desire for the world. When any person dies, it wrenches the heart of God. Death torments God day and night.

When we suffer over the loss of our loved ones, God suffers with us.

When we cry out in pain over the death of a child, God cries with us.

When you suffer over the death of a child, a parent, a spouse, a sibling, a friend, or any loved one, know that God suffers also. However much you suffer over the loss of your loved ones, God suffers more. He knows what it is like to experience the death of a child, because all people are his sons and daughters. He “gave birth” to us. He brought us forth. He cared for us. Tended us. Brought us up. Planned for our future. Laughed and danced and sang with us. 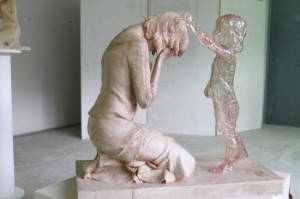 And when death strikes, God is there, grieving and mourning over the death of yet another child.

God knows what it is like to lose a child, not just because of Jesus, but because He experiences the pain of death whenever any person dies.

I think that more than anything, when a person is going through intense pain and suffering and they cry out to God in anger, despair, or frustration, while they do not really want theological answers or Scripture quotations, one thing they do want is to know that God is with them in their pain and suffering, and that He is suffering right along with them.

This idea that God suffers when we suffer is one way to encourage people to see the love and care of God in our lives, even when we experience the death of a child or face any other type of pain in life.