I’m stupid. I was so wrong. I thought you and your rules were stupid. That’s why I ran away. I thought I had everything all figured out and you were treating me like a baby with your rules. “Come straight home after school. We need to know where you are at all times. Don’t try any drugs even if the kids at school give them to you. That stuff will ruin your life. You can’t go to parties unless we know where you are and the parents are there. No parties with drugs or booze.”

The first few nights I stayed at a friend’s house. Her parents didn’t know I was there. She snuck me into her bedroom through the window and I left the same way the next morning. She said we couldn’t keep doing that.

I was hanging with some kids I didn’t know near a liquor store. This guy a little older than me bought me some snacks, then he took me to a movie. After the movie he asked where he could drop me off. I told him I didn’t care. He asked if I needed a place to stay and said I could stay at his sister’s.

She was real nice to me for a couple of days. Then she told me she couldn’t afford to let me live there forever. She said her friend could help me earn my way.

Her friend says he owns me. He says he owns all of the girls in our house. I don’t know exactly where the house is, but I’m pretty sure it’s somewhere in San Diego. When we leave, he puts us in the back of a van. We can’t see out. He drops us off and then picks us up later in the van and takes us back to the house.

When we get back to the house, he locks up our clothes so we won’t try to run away. Not that we have many clothes anyway. Only our working clothes.

This is going to make you so mad, but he’s got us hooked on this stuff. Honest. I didn’t know what it was. He said it would relax me. Now I really need it and he’s my only way to get it. 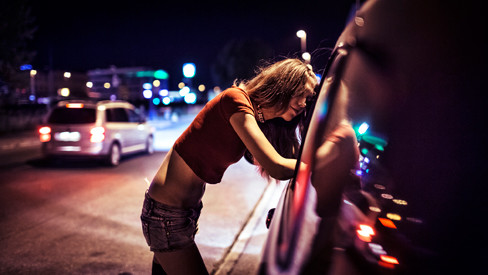 He makes LOTS of money off us, but we don’t get to keep it. He makes thousands every week. That’s how he can afford his car and jewelry. He doesn’t stay here. He probably has a nice house somewhere, not like the dump where he keeps us. He pays a woman who looks like a truck to guard us in case we get any ideas about running off naked.

We get fed, but have nothing. They took our ID, clothes and everything else we had. I was lucky to find the paper to write this. If I’m really lucky I’ll somehow find an envelope and a stamp. Maybe I can get a stamp from one of my customers and mail the letter.

Our guard buys the newspaper every day. If you can forgive me and still want me, put an ad in the lost and found pets section that says “Found. Blue eyed basset hound near the corner of” and list some street corner a couple of blocks north of El Cajon Blvd. about a mile east of the 805. My territory is not far from there. I’ll try to walk to the corner in the ad. If I don’t show between ten and midnight, try again until I show. It might take awhile for me to get a chance to make a run for it.

You won’t recognize me, but I’ll recognize you. Bring some of my clothes.

I heard there’s a drug rehab place near uncle Glenn’s. That would get me out of town. I can’t ever come back here. They might find me. If I can make it through rehab I’ll need to go somewhere else where they can’t find me.

I’ll find a way to pay you back for the rehab and the doctor. I need to be checked out. How could I be so stupid? I am so ashamed.

If you had lived back during the days of slavery, would you have helped slaves gain freedom?

If you answered “Yes!” then keep reading…

First, I want to thank those of you who donated to help me rescue girls from sex slavery.

I said I would cut off one inch of hair for every $100 dollars raised. I raised almost $600, but went ahead and cut off over 10 inches of hair anyway. I didn’t get enough to shave my head though!

Here are the Before and After shots: 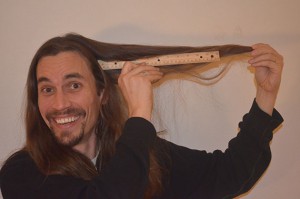 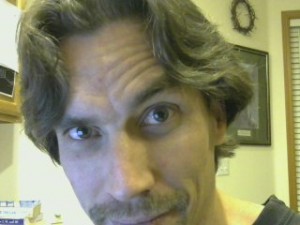 That second shot was with my webcam, which obviously as terrible color….

Anyway, if you would have helped rescue slaves from slavery, you still can. There is more slavery today than at any other time of history, and most of these slaves are young girls. How much more dire could it get?

If you are somehow still not aware of the crazy epidemic of slavery in our world (and here in the United States!) RIGHT NOW, go see some of the stats on this page about Forced Prostitution.

And just think about this: Current estimates say that about 12 million Africans were shipped across the Atlantic for slavery from the 16th to the 19th centuries.

But according to Human Trafficking Statistics, there are CURRENTLY 12.3 million slaves RIGHT NOW. Yes, this year. 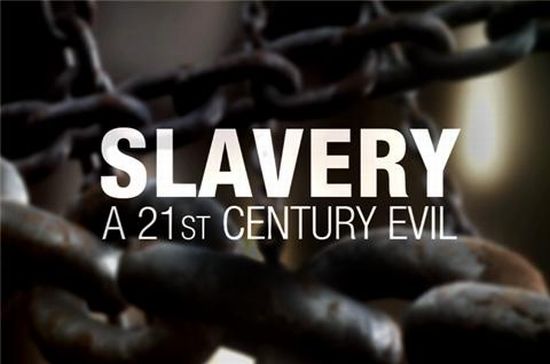 And many of them are children who are forced into prostitution. The average age is 12-14 years old. Most are girls. California has 3 of the 13 highest child sex trafficking areas. Some of them are raped 30-40 times EACH DAY.

Human Trafficking and child slavery is more common today than it was during the 300 years of slavery of our past.

There are more slavery victims this year than the total number of slaves during the entire 300 years of slavery in the past.

If you want to help, our favorite organization is the International Justice Mission. 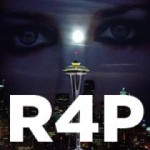 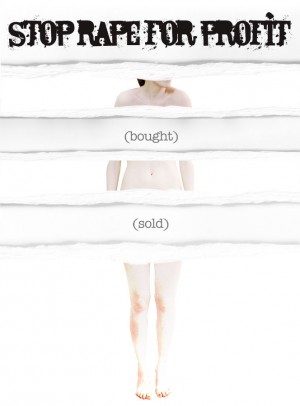 Did you know that men all over our country are paying money to rape young girls?

Worse yet, if these men get caught, they won’t go away to prison. They might get a slap on the wrist and spend a night in jail. The young girl will probably get arrested as well.

You haven’t heard about this? It sounds bizarre?

That’s because you know about it under a different name: prostitution. Or as we like to call it here in the United States: “Hiring an escort.” Essentially, prostitution is rape for profit.

Most people seem to think that prostitution is not so bad because the girls are willing. But the tragic truth is that the vast majority of them are not willing.

These young girls are out on the streets because they are in bondage and in chains. They are there against their will. They are being coerced, forced, and threatened. Sometimes, a guy they thought was their boyfriend got them hooked on drugs so that they have to go “turn tricks” for him just to get more drugs.

No matter what, prostitution is a form of rape. But since people are selling these girls, it is rape for profit. It is allowing other men to rape girls in exchange for money.

Some people seem to think the girls want to do these things, but no girl wants to be a prostitute. (See some others posts on the topic of human trafficking here.)

My wife and I have been trying to champion the needs of these poor girls for several years now, and have been trying to raise awareness of their plight in our own small ways, but we watched a documentary last week week which reiterated our need to stand up and raise the call once again.

The movie is called Rape for Profit Here is a preview:

If you are unaware about this dire issue in our own country (and around the world), I strongly recommend you watch this movie. You can watch it on iTunes here: Rape for Profit. 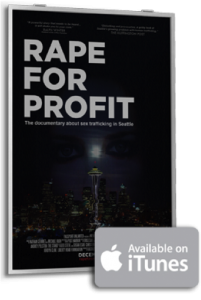 The stories you hear and the things you hear in this documentary will break your heart for these poor young girls who are caught into the darkest and most evil web on earth. They truly are trapped in hell.

I strongly encourage you to watch the movie.

Also, think about getting involved with some of the organizations and ministries around the country that are seeking to help rescue these young girls and show them how precious and valuable they truly are. Two groups we support are Children’s Hope Chest in Colorado Springs, and The International Justice Mission in Washington D.C. I see that Jamie (the very worst missionary) recommends a few resources as well.

And hey! As I was just visiting the website of the International Justice Mission to get the link above, I noticed that if you donate to them in the month of September (ONLY THREE DAYS LEFT), your donation gets doubled!

How aware are you of this great problem in our country (and around the world)? How did you hear about it, and what do you think can be done about it? Let us know in the comment section.